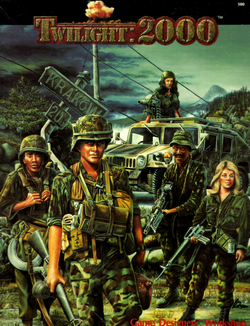 Twilight: 2000 is a Tabletop RPG first produced by Game Designers Workshop (GDW) in 1984 set in the aftermath of World War III (which took place in the late 1990s in that universe) and popular during the 1980s. Still played today, though- RPOL has a number of games in the setting.

The game centered around military characters, with the set-up in the first boxed set involving the last survivors of a US military division in Poland. The first few published adventures let the players journey through Poland and finally to the U.S., where they become involved with a conflict between the military and civilian governments of the shattered U.S. and the fanatical New America group. Supplements were also provided for playing in the Middle East or Britain. A popular trilogy of adventures also involved the last few nuclear submarines.

Suffered massively from Failed Future Forecast, with the end of the Cold War invalidating the time line. The Second Edition (released in 1990) featured a new timeline. The new timeline didn't prove popular, especially in Germany, since whereas NATO launching a land invasion of Poland made some kind of sense when the latter was part of Commie Land, the new timeline basically had Germany starting WWIII by invading Poland. This led some players to disregard it and use the original timeline, treating the whole thing as an exercise in Alternate History.

The timeline in Version 2.2 (released in 1993) presented the 1991 Soviet coup attempt as having been successful, thus preserving the Soviet Union and the Warsaw Pact for the rest of the timeline leading up to and into the war.

A sequel science-fiction RPG also from GDW used the first-edition timeline as its background, and showed what happened over the next three-hundred years. Originally called Traveller: 2300, the name was soon changed to 2300 AD since it had nothing to do with any flavor of the Traveller RPG. It had its own ruleset that was not compatible with Twilight: 2000. See that page for details.

The first scenarios were set in Poland, which surprised some of the Polish roleplayers, and they featured horribly mangled Gratuitous Polish.

In addition to the main game, GDW released two alternative settings for the second edition of the rules:

The second edition of the game also became GDW's in-house rules set, and was re-used with some modifications for the New Era edition of Traveller and the Dark Conspiracy game. Version 2.2, which refined the rules even further, was the final version of the game released by GDW.

A Spiritual Successor, Twilight 2013 which featured yet another rules set and a very different timeline was released in late 2009 by 93 Games Studios, but they went out of business in 2010 with little more than the core rulebook having been released.

. They partnered with Amargosa Press who worked on the 4th editions of Dark Conspiracy, Polish publisher Black Monk Games to create the parts of the game set in Poland, and Far Future Enterprises who published the 5th edition of Traveller.

Not be confused with Twilight, with which it probably doesn't have a large crossover demographic. Though a crossover fic between the two would be hilarious, confusing the two is one of the Things Mr. Welch Is No Longer Allowed to Do in an RPG.