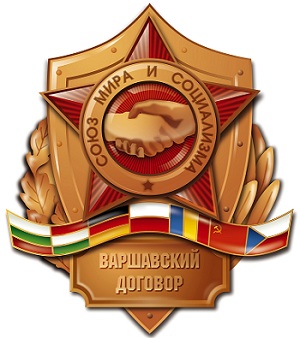 Alliance of Peace and Socialism - Warsaw Pact
"In nineteen hundred and forty five, the atom bomb became alive,
In nineteen hundred and forty nine, the USA got very wise.
It found a country had crossed the line, had an atom bomb of the very same kind!
People got worried, across the land, just like folks got in Japan..."
— Lowell Blanchard and the Valley Trio, "Jesus Hits Like An Atomb Bomb

Accordingly, it's a good place for us to discuss Central and Eastern Europe as Commie Land.

One should not treat the entirety of the Soviet bloc as the same thing. There were many differences in policies and repression levels, both between countries and within the same country at different times (sticking dissidents in mental hospitals was pretty common though).

Very important note: Yugoslavia and Albania don't count. They were part of Commie Land, but not the Warsaw Pact. Yugoslavia was never a member and Albania finally left over the Prague Spring. The latter aligned for some time more with China.

The states of the Warsaw Pact were:

Officially, the countries were not supposed to intervene in each other's internal affairs. Interventions in Hungary (1956) and Czechoslovakia (1968) were justified under "requests by the local governments".

With Hole in Flag, the Warsaw Pact collapsed.

In fiction, the existence of Warsaw Pact members other than the Soviet Union and East Germany is often ignored. Especially in Spy Dramas. Commie spies will almost invariably be Russian. Their home country will nearly always be depicted like Russia. You won't see the warm, almost-Mediterranean climate of southern Bulgaria, nor the medieval architecture of Prague (unless it's meant to be a crossover with Überwald).

For most of the Cold War, the conventional military balance in Europe was in favor of the Warsaw Pact from the 1950s to the late 1980s, an imbalance which was off-set by NATO's nuclear superiority until the Soviets achieved rough parity in the late-60s. From the mid-80s on, the introduction of various emerging "information age" technologies for military use swung the balance to the West. The plans for World War III were to go on the offensive immediately, in case of attack. The Warsaw Pact never planned to strike first. Neither did NATO for that matter. This meant that a Third World War could only have been started by accident. But neither side knew this, and often assumed that the other was preparing to strike first.

WP equipment was virtually all Soviet or local copies of Soviet weaponry (notable exception- the Czechoslovak L-39 trainer aircraft series. Remember the beginning of Tomorrow Never Dies? That one). When these countries later joined NATO, the U.S. had some MiGs and Sukhois to play with. Most of these states are now slowly retiring their Soviet-made aircraft.

A lot of works called into question the reliability of the non-Soviet Warsaw Pact members in an offensive war against NATO. The general answer would be as long as the Soviets were successful, the loyalty of the Warsaw Pact nations would certainly be assured. Even then, the Soviets would had to take some measures to avoid the Pact from unreliability, like not having East Germans fight West Germans, having Poles fight British or American troops, and using a Soviet formation in between two Pact armies. Of course, in the chaos of an actual war (with the high likelihood of a quick progression to a Nuclear War), many of these contingencies would have inevitably collapsed, and who knows how it would end.

For those interested in that subject read this PDF

, which contains a transcript of a conference where former senior officers from both sides discuss their war plans with each other. Additionally, one can also read some interviews here

to see the perspectives from Soviet officials, including members of the USSR General Staff.

The Warsaw Pact and its member states in fiction:

As Commie Land, all the states turn up at some point.