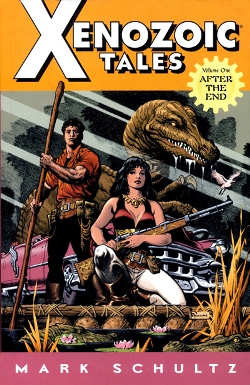 In the 26th century, mankind faces an epic struggle for survival. The forces of nature have spun wildly out of control. Mighty cities have crumbled, and the dinosaurs have returned to reclaim the earth. In this savage land, one man stands alone: Jack Tenrec. Defending humanity in a world gone mad. A world where only the strong survive. A world of... Cadillacs and Dinosaurs!
Advertisement:

In 2020, the Earth is shaken by upheavals and disaster. Mankind retreats underground, hiding in shelters, waiting for the end, kept alive by the mechanics working on the machines. So dependent are the survivors on the mechanics that they become a cult, a religion.

450 years later, mankind emerges to find a world that should not exist, filled with animals and plants from all ages of Earth's history. A world where dinosaurs hunt sabertooth cats and pterosaurs wheel above oceans filled with trilobites. Welcome to the Xenozoic age.

The world first appeared in Death Rattle #8 in a short story called Xenozoic! which introduced the characters and concepts. This was rapidly spun off into its own series under the name Xenozoic Tales, which premiered in February, 1987 and ran through issue 14, published in October 1996. Never officially canceled, creator Mark Schultz (not the Christian singer or the wrestler) still insists he'll be getting issue 15 out at some point. Don't hold your breath. Issue 14 didn't show up until two years after issue 13, largely due to the lushly detailed artwork Schultz drew. It's somewhat better known under the label "Cadillacs and Dinosaurs", which was the title of the first trade and rapidly supplanted the actual title in the minds of many fans.

The series focused on Old Blood Mechanic Jack Tenrec, who seeks to protect mankind against another catastrophe by working with the environment instead of against it. He also enjoyed working on classic cars, buried in the underground chambers with humanity during the long retreat from the surface. He lives in the City In the Sea (the remains of New York, now mostly submerged), protecting people from dinosaurs and dinosaurs from people and driving his precious ancient cars (modified to run on dinosaur guano) around the nearby deserts.

Alternately working with and against Jack is Hannah Dundee, ambassador from the city of Wassoon (Washington, D.C.), who has come to the City In The Sea for hidden reasons. While Jack is the Nature Hero, Hannah is the pragmatic type, believing in scientific explanations. Together, they struggle against poachers, corrupt politicians, and the wilderness while coming ever closer to understanding the mysteries of their world, including the sentient, reptilian Grith, who apparently knew far more than they ever let on.

The series was popular enough to have several spin-offs, usually under the Cadillacs and Dinosaurs label, including a Saturday morning cartoon by Nelvananote  and animated by APPP (now available on Youtube

in its entirety), an RPG setting, two video games (an arcade beat 'em up Cadillacs and Dinosaurs by Capcom and a visual novel The Second Cataclysm for the Sega CD), and even comics published by other companies during the lengthy gaps between issues of the main title.

In 2015, Mark Schultz released Storms At Sea, an illustrated novella which is not directly connected with Xenozoic Tales and is set in what appears to be an alternative twentieth century. But in a trope of Recursive Canon, the characters in Storms find a prediction warning of the world becoming exactly as shown in Xenozoic, including the causes of this dire future to come.