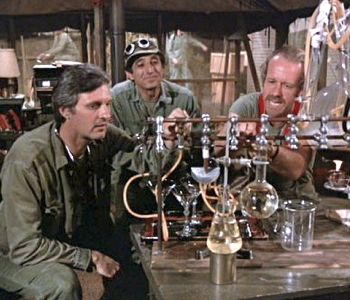 Alcohol for medicinal purposes, you understand.
"It's rotgut. Wheresoever men are gathered together, someone will find something to ferment in a rubber boot, distill in an old kettle, and flog to his mates. Made from rats, by the smell of it."
— Sergeant Jack Jackrum, Monstrous Regiment, by Terry Pratchett
Advertisement:

A military company has one member — usually low-ranking — who secretly distills liquor.

Well, more or less secretly, depending on how strict regulations are. Usually winked at all around. Especially by those who drink it. Though officers sometimes have an interesting time getting connections to it.

The moonshiner is often quite skilled at it; the Hillbilly Moonshiner is often his backstory. And the hooch itself, though frequently of fire-breathing potency, is at least drinkable without danger. Although the drinkers may curse it and describe it negatively, it generally doesn't blind or kill them, presumably because (from the characters' POV) if it were truly dangerous it wouldn't get the necessary nod-and-a-wink from higher up, and (from the writer's POV) they don't want to take out characters that way.

Often produces it for a toast To Absent Friends.

Because it requires the use of a still, appearances in cultures prior to the High Middle Ages are anachronistic — and even in the High Middle Ages stills were rarities, mostly used for medicinal purposes. This character has been known to appear earlier, making fermented brews rather than distilled liquor.

If he's not The Scrounger, he gets his parts from him.