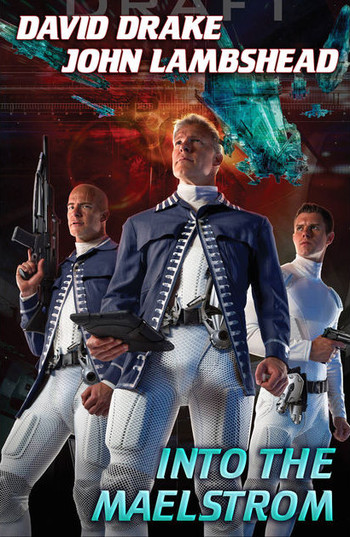 How do you travel through hyperspace? Well, you could fly like an aircraft, or sail like a seagoing ship, but what about bicycling?
Advertisement:

is a Military Science Fiction Space Opera novel series by David Drake and John Lambshead, based on the rise of the United States. An unspecified number of centuries into the future, much of the galaxy remains unexplored due to the difficulty of Faster-Than-Light Travel, which can only be accomplished by large, fragile ships or man-powered "frames". The Cutter Stream Colonies lie across a vast "bight" in the Continuum from the Home World of Brasilia, quiet, agrarian, and vulnerable to predation by nomadic Riders. Due to the terminal illness of his brother, young gentleman Allen Allenson is forced to take command of the Cutter Stream Militia, and on an expedition to inspect his family's holdings on the edges of the Stream he discovers signs that Brasilia's rival, Terra, is trying to make inroads into the remote Hinterlands. It is determined by the provincial government that this cannot be allowed to stand, and so Allenson is sent to lead the Militia against the Terran forts.

According to the dedication, the series was originally the late Jim Baen's idea.

Alternative Title(s): Into The Hinterlands