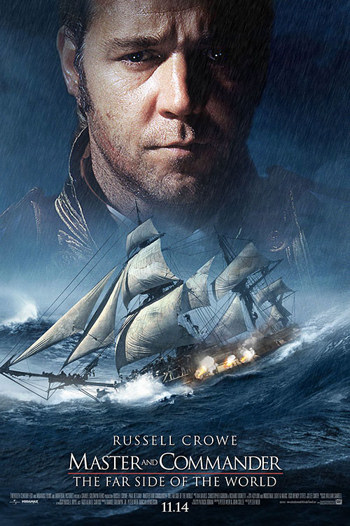 "For England! For home! And for the prize!"
— Captain Jack Aubrey
Advertisement:

Master and Commander: The Far Side of the World is a 2003 Age of Sail naval warfare drama, based on the Aubrey-Maturin series of historical novels by Patrick O'Brian set during The Napoleonic Wars. It is directed by Peter Weir and stars Russell Crowe as Captain "Lucky Jack" Aubrey of His Majesty's Ship Surprise, and Paul Bettany as ship's surgeon, naturalist, and Jack's dear friend Stephen Maturin. It is known for being one of the more accurate depictions of Wooden Ships and Iron Men on film, true to its source.

The plot of the film references several books in the series, including Master and Commander (1969) and The Far Side of the World (1984). Captain Aubrey is sent to the coast of Brazil to engage a private man-of-war employed by Napoleonic France, only to find the enemy considerably more powerful than his beloved but nearly obsolete frigate, the Surprise. Worse, the enemy commander is Aubrey's equal or even superior as a tactician and seaman. Going beyond his orders, Aubrey pursues the enemy into the Pacific where she is raiding British whalers, and attempts a final stratagem that will either doom the Surprise or give her victory.

Alternative Title(s): Master And Commander The Far Side Of The World