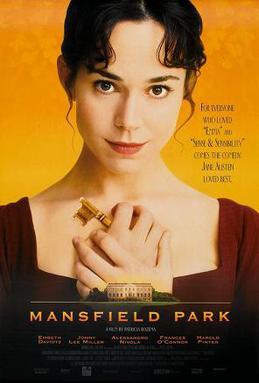 Mansfield Park is the 1999 adaptation of the Jane Austen novel of the same name, written and directed by Patricia Rozema and starring Frances O'Conner as Fanny Price. It is famous (or infamous) for its alterations to the source material. As Fanny was the most shy, timid, and unassuming of Austen's protagonists, Rozema made the character more outspoken and lively... largely by combining the character's traits with those of Austen herself.
Advertisement:

Another major plot point is that of slavery, which the novel implies is the source of the Bertram wealth. The film brings the issue to the fore by making it part of the rift between Sir Thomas and his children, as well as a graphic depiction of its horrors late in the film.

Besides this, and a few other alterations to compress events, the movie follows the plot of the book. Frances Price, having married beneath her station, is obliged to give up her eldest daughter Fanny to her relatives at Mansfield Park. Fanny goes to live at the grand mansion under the care of her forbidding uncle Sir Thomas, his indolent wife Lady Bertram, and her tyrannical aunt Mrs Norris. Her cousins are the haughty Maria and Julia and irresponsible Tom, leaving her with no friend in the world but the younger son Edmund. As the years go by, Fanny becomes an intelligent young woman (though nobody asks for her opinion) and a mutual attraction develops between herself and Edmund.

However, Fanny Price remains a poor ward of the family in everyone's eyes and by default becomes a kind of genteel servant at Mansfield. The status quo is interrupted when, during Sir Thomas's absence, Mary and Henry Crawford arrive in the neighborhood. Both are witty, charming, and attractive, and shortly thereafter Tom and his friend Yates introduce the idea of home theatricals—using a trashy, salacious play called Lovers' Vows. Maria, despite being engaged, flirts outrageously with Henry, while Edmund and Mary soon fall for each other. Things get more complicated when Henry transfers his attentions to the aloof Fanny and Sir Thomas returns ready to see his children and his ward dutifully married.