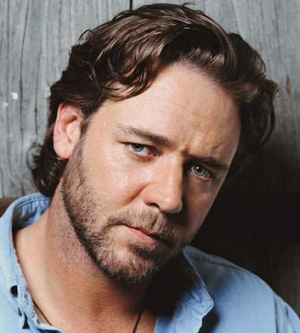 "I think my reputation is something that I'll probably try to spend the rest of my life living it down and it probably won't work."
— Crowe, interview with Steve Kroft for 60 Minutes

Russell Ira Crowe (born April 7, 1964 in Wellington, New Zealand) is an Oscar-winning actor from New Zealand/Australia, although he frequently plays Fake Americans. Among his more famous starring roles were in Gladiator (as an Ancient Roman general/gladiator; Oscar winner), A Beautiful Mind (as a brilliant yet troubled mathematician; Oscar nominated), and The Insider (as a corporate whistleblower; Oscar nominated). As a musician he was formerly in the line up of a band called "30 Odd Foot of Grunts", and co-wrote a song with Alan Doyle for Doyle's band Great Big Sea, "The Company of Fools". He was also cast as Jor-El in Man of Steel, Zack Snyder's reboot of the Superman films, and as Javert in the film adaptation of the musical Les Misérables (2012).

After several highly publicized fights he has gained a reputation for his temper. He once headbutted the actor Peter Cousens and threw a telephone at a hotel concierge. The American Secret Service protected Crowe for a time when Al Qaeda allegedly threatened his life as some sort of destabilization plan that involved eliminating iconic Americans (despite not being American...).

Are You Not Entertained?!

Are You Not Entertained?!