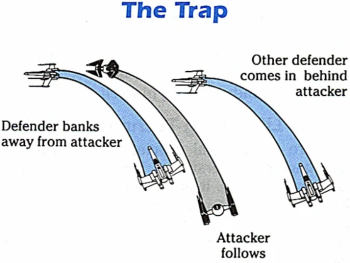 "If your attack is going well, you have walked into an ambush."
— Murphy's Laws of Combat
Advertisement:

An opponent lures their enemy into a trap by feigning either retreat or weakness. Once the attacker has moved into position, or spent most of their energy/ammo attacking, the defender turns the tables by going all out, using Geo Effects, or calling their allies in ambush.

This can be done by either heroes or villains, though heroes tend to consider such tactics "dishonorable". When done to a hero, the trap's fatality depends on the hero's level of Plot Armor, but will usually give them at least a good run for their money.

Expect at least one ally to say "This is too easy", and later yell, "No, stop! It's A Trap!" and get either ignored by the hero or heard too late. This can also take the form of an enemy enticing their attacker into "winning" a Pyrrhic Victory before they realize what just happened.

This tactic, although it sounds splendid, is hard to pull off in Real Life because your own men don't know it is a trap; they only know that there are a lot of men with sharp metal objects and/or firearms pointed at their backs. An army has to be well disciplined, and perhaps practiced in this tactic beforehand, or a feigned retreat will turn into a real one.

If the strategy includes tricking a foe into chasing you, it may involve a Wronski Feint or Give Chase with Angry Natives.

One of The Oldest Tricks in the Book. Specifically, it's strategy #28 of The Thirty-Six Stratagems.