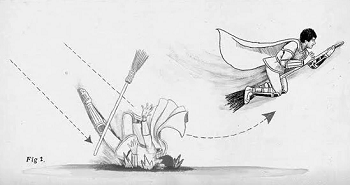 A Wronski Feint is a maneuver where a pursued character feints at an obstacle in order to get their pursuer to follow. Because the pursuer is focused on following their target, rather than their actual personal movement, this allows the pursued character to pull up at the very last second, and the split-second of confusion, or their enemy's inferior piloting skills, causes the enemy to crash into the obstacle instead of following.
Advertisement:

This trope allows the work to show off what a skilled pilot the hero is — he can take out the enemy with only his piloting skills. It also shows the audience his level of fearlessness and ability to keep cool under pressure.

Note that while the obstacle is usually a cliff, the ground, or a similar immobile object, it's not unheard of to pull this off with missiles, other vehicles, or other mobile targets.

Named after the Quidditch technique where one team's Seeker will pretend to see the Snitch near the ground and go into a dive to attempt to lure the opposing Seeker into crashing into the ground. The Wronski Feint is first mentioned in Harry Potter and the Goblet of Fire, and again in Quidditch Through the Ages by Kennilworthy Whisp, wherein it was revealed to have been named after famed Polish Seeker Josef Wronski (Józef Wroński).

Subtrope of Try and Follow. Compare Dodge by Braking, Deadly Dodging. Buzzing the Deck is a similar move done just for the hell of it. A Game of Chicken can cause one or both participants to fall victim to this.