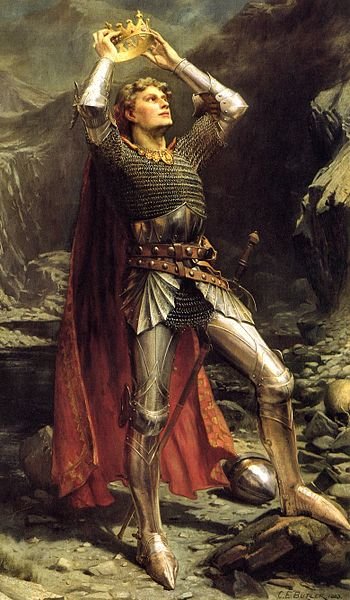 by Charles Ernest Butler
"This man was Arthur, King of the Britons. For this... was... England!"
—The Historian, Spamalot
Advertisement:

Arthur, King of Britain, son of Uther Pendragon, definition of The Good King and namesake of the Arthurian Legend. The specifics of what he is has varied greatly through the ages, but one constant that remains is his being a leader of renown. The seat of his kingdom is most often given as the famed Camelot.

According to legend, King Arthur was the most glorious ruler of the Britons, long before there ever was an England or a United Kingdom. The Britons were a Celtic people who were colonized by The Roman Empire, and the legend of Arthur grew out of the Empire's decline. Britain was left to fend for itself against the encroaching Anglo-Saxons and other Germanic peoples, distant cousins of the later Vikings.

According to the early legend, the man who led the Britons in battle and stopped the invaders for a while was Arthur. For a while — because the Anglo-Saxons eventually won against the Britons, eventually forming England while independent Briton rule was reduced to pockets like Wales and Cornwall. Nevertheless, the Britons kept the legend of Arthur alive. Many emigrated to Brittany in (what is today) France, eventually lending their name to the region. The Bretons, as they were eventually known, brought the legend of Arthur with them where it eventually found a new audience. More on that later.

Some of Arthur's earliest appearances are in pseudo-historical writings where his material has an air of folklore about it. For instance, in the battle of Mt. Badon, his climactic victory against the Anglo-Saxons, he is said to have slain hundreds of men singlehandedly. Arthur also appears in folk tales and poetry, where he is often a figure from the glorious Celtic afterworld Annwyn who would help heroes on their quests and protect the land from supernatural and mundane enemies alike, or just a champion warrior and leader of men who does the same thing. He has a band of warriors under his command, many with abilities far beyond those of ordinary men. In possibly one of the earliest references to him, found in Y Goddodin — a poem lamenting/celebrating a Briton defeat — a man's obituary says that he slew 300 men though or despite that "he was no Arthur". And Arthur's own death is said to be at the Battle or Strife of Camlann, dying together with one Medraut. But the Britons also said that Arthur's grave was anoeth, something wondrous or mysterious and exceedingly hard or impossible to see or do — in other words, there was no grave at all in the normal sense, and so they believed that he would one day come again to save them in their hour of greatest need.

While historians believe the context of the Briton/Anglo-Saxon conflict is real, including the battle of Mt. Badon, Arthur's historicity is rather more contested (as is where Mt. Badon was). He may have been a real guy Shrouded in Myth, or he may have been at first purely folkloric (hence the early supernatural stuff) and he may have been attached to the real events.

Most stories of Arthur today are based on Geoffrey of Monmouth's History of the Kings of Britain, written after the Norman Conquest of England, and where Arthur comes in near the end as the Breakout Character. Geoffrey was probably the single most influential recounter of the legend. He was one of the first to call Arthur a king — in practice The High King ruling over other kings — as Arthur was more often called just a soldier or war-leader in earlier material. Also, he first wrote down (perhaps made up) Arthur's Origin Story — he was conceived via a Bed Trick thanks to the other Breakout Character, the wizard Merlin. Geoffrey was the first to write of Merlin, Arthur's queen Guinevere, and Arthur's sword Excalibur in their commonly recognizable forms, though their prototypical counterparts appeared in Welsh and Cornish material which was mostly recorded after Geoffrey wrote, giving historians headaches as to which really influenced which. He also wrote that after Arthur's final battle with his nephew Modred (later Mordred), he was taken away to the mystic isle of Avalon to be healed of his wounds, and implicitly wait until he is needed again.

Geoffrey clearly influenced other writers like Chretien de Troyes in France (who came up with Camelot) and elsewhere, who then developed the whole Chivalric Romance thing and applied it to Arthur and his warriors, turning them into Arthur and his knights of the Round Table. As the knights grew in prominence, new characters were invented and older characters were expanded upon or fell into relative obscurity, and entire new storylines like the quest for the Holy Grail and a Love Triangle between Arthur, Guinevere and his best knight Lancelot were created. Arthur himself was more and more Demoted to Extra until the final stretch of the legend leading to his exit. These writers in turn, down through the centuries, influenced Sir Thomas Malory and other authors up to the present day.

The timing of this narrative resurgence isn't coincidental. The Anglo-Saxons, naturally enough, weren't very interested in retelling the tale of a Briton leader who fought against their ancestors — but the Normans, who had overthrown the Anglo-Saxon kingdoms and now found themselves ruling over a mostly Anglo-Saxon population, very much were. Arthurian myth helped portray the Anglo-Saxons as barbaric and, more importantly, illegitimate usurpers and invaders, thus allowing the Normans to portray themselves as righting an ancient wrong and in a sense as picking up where Arthur left off.

And now, a recounting of Arthur's life, mainly according to Malory:

c.475 AD, Tintagel Peninsula, Cornwall. On this small island, Arthur is conceived. His father, Uthernote according to the Welsh, Uther ap (son of) Custennin ap Cynfawr ap Tudwal ap Morfawr ap Eudaf ap Cadwr ap Cynan ap Caradoc ap Bran ap Llŷr, has been lusting after Igraine, the Duchess of Cornwall, and so convinces Merlin to disguise him as her husband Gorlois. He sneaks into bed and sleeps with her, producing Arthur, with no regard for weird lines of succession. Castle Island, Penn Du, and the Tintagel mainland contain ruins of a castle that was built nearly 1000 years later; evidence does show that it had been inhabited and not Romanised since the early millennium, though. The land is owned by the current Duke of Cornwall, who is appropriately enough the monarch's son.

Initially, in the early Arthurian chronicles, Arthur seemed to have been raised in Uther’s court or at least be fully aware who his birth parents were. However, a tradition invented by Robert de Boron had Arthur be raised by Sir Ector instead. In Robert de Boron’s account, it was because Merlin wanted Arthur to live a normal life but some later medieval and modern authors had it because he was illegitimate. Malory insists that Arthur was born legitimate since his parents were married at the time.

As it goes in these step-sibling stories, one of them must naturally be more greatly preferred to the other; it's Ector's actual son Kay (who was originally a major figure in the earlier Arthurian legend in his own right) that is less favoured, though he later does become one of his Knights of the Round Table. Arthur lives a happy life with them, as Ector has lots of land, possibly in the Forest Sauvage near Bodmin Moor, and trains them both well. When he is called to the throne, Arthur is shocked and shortly upset that Ector is not his real father.

When Arthur is around 15 years old, he becomes king by pulling a sword out of a stone, which only the rightful king could do. This sword was later replaced by the even cooler Excalibur, given to him by The Lady of the Lake, though sometimes they are the same.

However, many of the nobles and kings of Britain are initially against swearing fealty to a young boy thus a rebellion arose. Eventually Arthur defeats the rebels and marries Guinevere. As a marriage gift, Arthur gets a Round Table around which he decides to form the famed chivalrous brotherhood of knights. Incidentally, the battle of Mt. Badon and the Saxon conflict is completely obscured by this stage. Malory has the fighting between Arthur and the rebels be derailed by Saracens right out of the Crusades instead. Then after defeating the rebels, Arthur is challenged by the Roman Empire, and conquers that too.

When he returns home, Arthur doesn't get up to much then, with most of the medieval tales featuring him as a minor character in relation to the knights. He is offered many battles, but either chooses to or is told to stay at Camelot and protect the kingdom, with the other knights taking his place — namely Lancelot, Gawain, Perceval and Galahad. The quest for the Holy Grail happens around this time, but as the king, Arthur doesn't take part in it.

At some point he is sometimes said to have unwittingly committed incest with one of his sisters, Morgause. This spawns his eventual final foe Mordred who was now both his nephew and son. But this is not hinted at in any earlier material. His sisters Morgause and the more famous Morgan le Fay were also made into his enemies while they weren't originally. Morgause often gets combined with Morgan in modern works.

While Guinevere most famously has an affair with Lancelot which leads to the breaking-apart of the Round Table's fellowship, in earlier tellings starting with Geoffrey, Guinevere hooks up with Mordred while Arthur is away fighting his wars.

The earliest mention of Arthur's final battle only says that Mordred (Medraut) also died there, and the wording is ambiguous on whether they were fighting against or alongside each other. But the tradition is otherwise unanimous in making them enemies. In the earlier tradition, Mordred usurps Arthur when he leaves to fight the Romans while in the later tradition, Mordred tries to claim the kingdom for his own while Arthur is off chasing Lancelot in either France or Brittany, causing him to return.

After the battle, Arthur is sometimes said to grant his kingdom to a Cornish relative (or pseudo-relative) of his who is of Roman descent. Arthur is then taken by probably Morgan le Fay or someone else, to Avalon where the waters can heal his wounds.

This is a page about the character in his fictional appearances. For more information of the mythos and Arthurian cycles, and modern adaptations of them, see Arthurian Legend. For other Arthurian characters, see here.

Example of:
Depending on the Writer