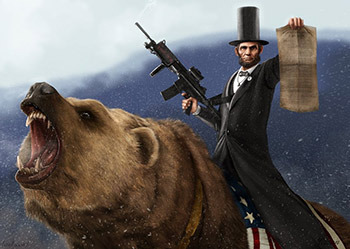 If only history could be this awesome.

"So, all in all, just a normal day in the life of Leonardo da Vinci. Turn lead into gold, paint the most famous portrait of all time, and invent the first hang glider. And I bet it’s not even 9 AM."
— The Agony Booth recap

Sometimes a Historical Domain Character is portrayed by adding a copious amount of badassery and Stuff Blowing Up, that was either far lesser or non-existent with the Real Life person. The reasons could range from sloppy research to Rule of Cool.

Maybe a king, who was known for very little else but diplomacy, gets to be a war hero instead. Maybe Mahatma Gandhi gets to fist-fight grizzlies. Maybe a pope was a vampire hunter in his spare time.

Compare Beethoven Was an Alien Spy (a possible justification of this trope), Adaptational Badass (when this happens to a character from a previous work) and Memetic Badass (when the Badassery is upgraded through Memetic Mutation). Giving the same treatment to a living famous person would generally fall under Celebrity Power.

See also Historical Hero Upgrade and Historical Villain Upgrade, both of which this trope may very well overlap with if the character's more heroic or more villainous actions come off as Badass.

Robot Chicken imagines the American Revolution in the style of 300.

Robot Chicken imagines the American Revolution in the style of 300.