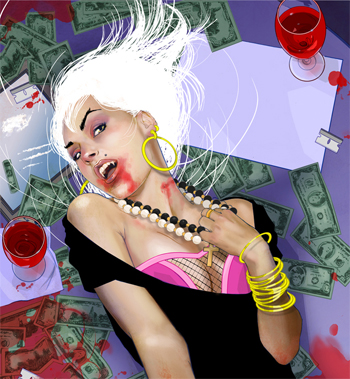 Drugs, money, sex? Blood is where it's at.

Sometimes, plain old vanilla-flavored sex just won't cut it. For some, it takes actual cutting, biting and drinking of the resultant flowing blood to get sexually turned on. When one or more characters enjoys Hemo Eroticism they need to "feed" on others, and probably enjoy being "fed upon" by their partner in a similar fashion. Characters with this Fetish aren't necessarily violent, they may look for willing partners rather than kidnap someone and strap them down. Nor are these characters all blood addicted vampires, though this group does make up a majority of this trope's examples. What unites all Hemo Erotic characters is that they can only be sexually aroused or satisfied when blood is involved, sometimes accompanied with ritualized cutting or biting.

That said, this trope is strongly connected with the Interplay of Sex and Violence involved in most sensual blood drinking, especially if vampires are involved. For them Hemo Eroticism is Better Than Sex and often forms a part of their feeding habits. Between two vampires (or a vampire and their preferred mortal lover) feeding on and being fed from are the ultimate — and perhaps only — means to express physical love. It's important to make the distinction that while it's possible for a vampire to make the character they feed on enjoy it by employing the Kiss of the Vampire, the vampire may or may not enjoy Hemo Eroticism as well. Sure, the blood (probably) tastes good and it's easier to feed if the victim is having fun, but that doesn't mean they can only get off if it's involved. It may in fact be a sign that a vampire isn't friendly when the ennui of decadent immortality has led them to pursue Hemo Erotic feeding to begin with.

Even mortal characters who are into Hemo Eroticism can sink into The Dark Side of this fetish. What sometimes happens is they're such perverted hedonists that the pain is what they're going for. To that end they may use other wicked and sharp instruments like knives, razors, or Femme Fatalons to kink it up further. Especially deviant vampires may purposely abuse the fact that vampire bites can be painful to get sadistic kicks while they sink their fangs into a victim. Oh, and if they're also a Combat Sadomasochist? Best to run before they lick the blade.