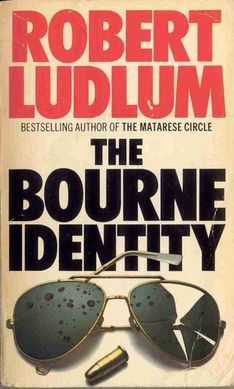 Cain is for Carlos, and Delta is for Cain...
Advertisement:

During the Vietnam War, David Webb is a foreign service officer specializing in Far East Affairs. While on assignment in Cambodia, his wife and children were inadvertently slaughtered in an action against the Viet Cong. Mad with grief he fled and joined Medusa, a special forces death squad made up of hardcore criminals. After the war, he was a recruited to Treadstone 71, a joint-Military Intelligence/CIA program that was going after the (real-life) legendary assassin, Carlos the Jackal

. David Webb takes on the name of Jason Bourne

as part of his plan to lure out Carlos the Jackal by taking credit for Carlos' kills, then kill him.

A long-running series of 17 (so far) Spy Fiction novels, three written by Robert Ludlum, the next 11 by Eric Van Lustbader, and as of 2020, a new rebooted series by Brian Freeman (which have no connection to the first 14 novels). The first novel, The Bourne Identity (1980), involves Jason Bourne losing his memory and being hunted through the streets of Paris by the CIA (who think he's dodgy) and Carlos the Jackal (who just wants to kill him). On his way, he meets (well, more or less kidnaps) a Canadian economist called Marie St. Jacques.

In The Bourne Supremacy, someone has started killing under the Bourne name and is threatening to cause a war between China and the West. To get Bourne to kill him, the CIA kidnaps Marie (now married to Bourne). Carlos the Jackal does not really feature here.

In The Bourne Ultimatum, Carlos issues a final challenge to Bourne, now in his 50s and a college professor.

Made into a TV mini-series in 1988 starring Richard Chamberlain and Jaclyn Smith that was fairly faithful to the first novel, and a series of movies that drops the Carlos plotline and recasts Bourne as a Present Day black-ops CIA assassin.

These novels include examples of: