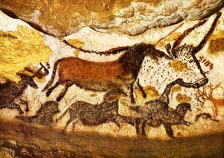 , c. 17,000 BC
"...machinery claims are made to the so called ideas in almost every film, and not infrequently they are backed up by suits for heavy damages. Inasmuch as these ideas, in the main, descend to us from Neanderthal man, it is often quite impossible for a given movie author to prove that he invented what he is accused of having stolen. So he must hunt for it in the literature of the past, and thus prove that, if he lifted it himself, so also did the man claiming it. Defending such suits has familiarized the solicitors of the movie folk with all the popular literature back to the earliest written records."
— H. L. Mencken, "Blackmail Made Easy"
Advertisement:

The Oldest Ones in the Book recorded before the Greek alphabet was invented, around 800 BC. Mostly from mythology, and generally orally transmitted before being written down. If the work you're thinking of has a known author, and it's not ancient Egyptian, it's probably not from this era.

Specific works from this period:

Note: Tropes originating in mythologies/religions that aren't Mesopotamian, Egyptian, Anatolian, Vedic, or Chinese are never indexed here, as we have no idea whether those stories even existed in 800 BC, or what form they had, centuries or millennia before they were first written down. Even The Bible and Classical Mythology are only Older Than Feudalism.note Technically, some very old parts of the Books of Genesis, Exodus, and Numbers are probably this old. However, we aren't sure which parts exactly and in any case it's easier to treat the whole Bible as younger. Likewise, evidence from Mycenaean Greek Linear B

tablets indicates that a few of the later Greek deities were worshipped in some form by 1200 BC, but we have no narratives about them until the classical era. Early folklorists often started with the assumption that folktales and myths were primordial; more research has shown that people can and do modify all sorts of tales for any purpose.