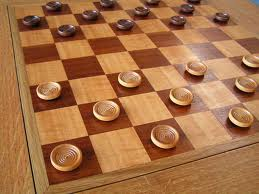 The board at the start of a game
Advertisement:

Checkers, or English draughts, is a strategy board game for two players. It's in the draughts family of games, which have the following properties in common:

The word "checkers" is more common in the USA and Canada, and "draughts" everywhere else. "Checkers" usually means the specific game of English draughts, but it's also used to refer to the other draughts games (for example: "Turkish draughts" may be called "Turkish checkers"). Draughts games vary in terms of the size of the board, the number of pieces, and what powers a piece gains when it reaches the opposite side. In most versions, capturing is compulsory (though capturing the most pieces possible might not be). This rule is often forgotten or even disputed, to the chagrin of some

. Players of one version are often unaware the other versions exist.

English checkers is played on an 8x8 board of alternating color squares, much like the one chess is played on. There are only two kinds of pieces: the normal checkers, which can only move forward diagonally, and "kings" which are created when a checker reaches the far side of the board and can move forward or backward diagonally. Since all moves are diagonal, all pieces throughout the game will always be on the same color square; the squares horizontally and vertically between them will never be occupied.

Capturing an enemy piece is accomplished by jumping diagonally over that piece with your own; if your opponent is dumb enough to leave his pieces in a bad formation, it's possible to capture multiple enemy pieces by chain-jumping over them all in a single turn. However, if the compulsory-capturing rule is used, clever sacrifices can be made to force your opponent's pieces to go where you want them to. The most popular gag in fiction involving checkers has one braggart player who confidently moves a piece, and the other, generally more subdued character who then jumps over an exaggeratedly large number of pieces, then asks to have their piece promoted (usually by saying "king me").

Checkers is a very old game, possibly Older Than Dirt, with similar games dating back to ancient times. A board resembling a draughts board was found in Ur dating from 3000 BC, and it has been confirmed that a game like this was played in Ancient Egypt; the British Museum has checkerboards found in burial chambers. It was referenced by both Plato and Homer, who claimed it was of Egyptian origins.