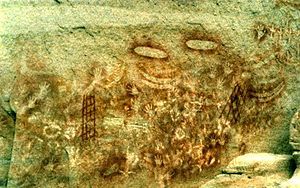 The Dreaming
The traditional stories of the Aboriginal peoples of Australia.
Advertisement:

The time before the Europeans come to Australia, though some particular myths have told the story about a white man that came to their land, bringing either great things or great harm. While the myths as a whole tend to be rather diverse, there are some common elements among the various Aboriginal myths.

Each group has different myths, so they will vary depending on which region said group is from.

A collection can be found here

Writers who are thinking of incorporating these myths into their works should be aware that some Aboriginal people feel that a form of "cultural copyright" exists on their traditional stories, and may object to them being used by someone from outside their tribe or culture. Always talk to Elders (the leaders of Aboriginal communities); most are willing to help you sort out kinks in your stories.