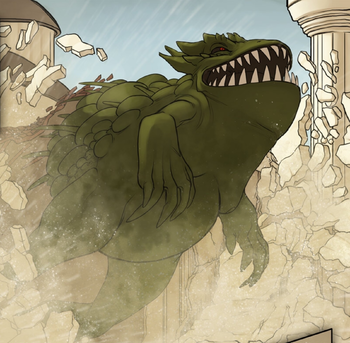 We are toadally screwed.

Frogs, toads and other amphibians come in a range of sizes, but are mostly tiny. The largest species are about fist-sized. In fiction, on the other hand, they tend to be scaled up. This can range from dog-sized to building-crushing — a perfect storm of threatening and disgusting. They could also be Bewitched Amphibians who keep their human size when turned into frogs.

Frequently overlaps with Amphibian Assault, but not always. Some toads just wanna hang out and chill.