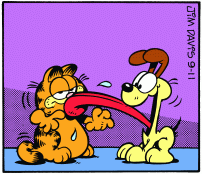 Odie can give you a real lickin'.
"Oh my God! It's like a tape measure!"
— Anvil (pulling on Dabbler's tongue

A character with a tongue of surprising, implausible, or downright impossible length.

A Justified Trope in certain cases — say, a mutation or non-human anatomy — but in other cases this is left completely unexplained (and usually Played for Laughs). The lucky person in possession of this tongue frequently has a surprising amount of control over it, and may even use it as a weapon.

Characters without this feature may suddenly develop one, often in tandem with a Jaw Drop, when startled, screaming, or confronted with a Head-Turning Beauty.

Michaelle Milken has a tongue long enough to eat a cherry from ice cream on the table by itself.

Michaelle Milken has a tongue long enough to eat a cherry from ice cream on the table by itself.