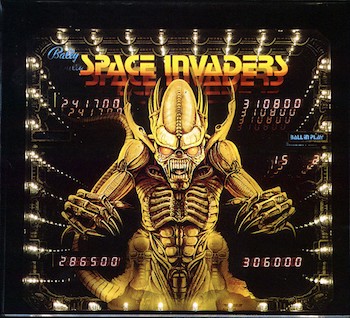 Space Invaders was an arcade pinball machine designed by Jim Patla and released by Bally in 1979. As Bally's Video Game division Midway was the Western distributor of the arcade video game at the time, that makes this the Ur-Example of the Pinball Spin-Off.

As with most other pinball games at the time, there wasn't much of a story to the game — the player would simply shoot pinballs at various alien targets to repel the invaders. To flesh things out, Bally distributed an eight-page Comic Book/Advertisement to arcade operators that provided a backstory: the invaders were a race of Giger-esque aliens who have infiltrated Earth as sprites in the Video Game cabinets. Now the second phase of their plan has begun, as the aliens exit the arcade games and combine to form incredibly addictive pinball machines that completely steal the minds (and quarters) of unsuspecting humans.

The entire comic can be read here.

The art for the game (by Paul Faris) was heavily "borrowed" from the designs used in the movie Alien. Naturally, 20th Century Fox sued Bally over the resemblance, stopping production after 11,000 machines were manufactured. Bally eventually reached a settlement with Fox, paying royalties for each pinball sold.