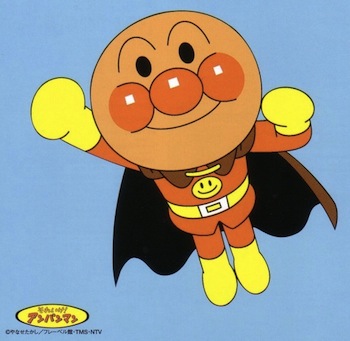 Genki Hyakubai!! note  Means "100% Greatness!" in Japanese
I've realized how great it is to live,
Even if the scar in my heart hurts
— Opening lines of "Anpanman's March"
Advertisement:

Anpanman (アンパンマン), by Japanese writer/illustrator Takashi Yanase, is one of the most popular series for young children in Japan. Yanase published the first Anpanman story in 1973, and kept cranking them out for 40 years until his untimely death in 2013.

At last count, he had well over 100, translating to three or four books per year during that span — and that's not counting his other works. He also penned a monthly manga (1976-1982) and a Sunday newspaper comic strip (1990-1994, partially reproduced in 3 volumes with parallel English translation). The television series, called Soreike! Anpanman (それいけ！アンパンマン, "Go! Anpanman"), has been on the air in Japan since 1988 and has no sign of slowing down, with over 1,000 episodes, 25 theatrical films, and numerous Edutainment OVAs (as of 2013). The show has well over 1,500 characters and has an entry in the Guinness Book of Records. Heavily merchandised, the Anpanman characters appear on virtually every imaginable children's product, including clothes, video games, toys and snack foods. Though famous in its country of origin and even having a museum (or several) of its own, the series is not well-known outside Asia and the Middle East, though that might be about to change with Tubi's release of six of the franchise's movies

Characters: (Only the major ones, otherwise the list will be too long for most hardbound books.)

Has a character sheet currently in the works.

Not to be confused with WanPanMan (although he was the inspiration for him).