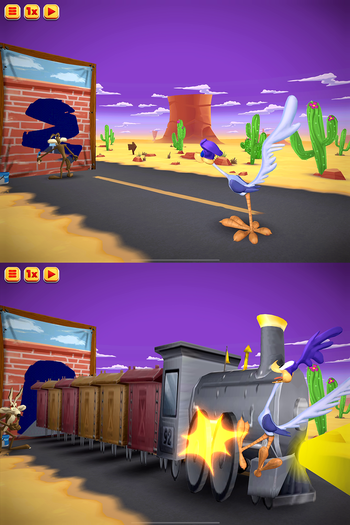 That is highly unrealistic! Everyone knows the Road Runner wouldn’t get hit!
Batman: I would paint a tunnel on the side of the cliff, because you'd run at the tunnel thinking it was a tunnel when it was actually a cliff and you hit a rock and it'd hurt really bad and you'd fall down unconscious.
Flash: But what if I ran into the tunnel and it was an actual tunnel but when you tried to follow me it turned back into a cliff?
Batman: ... The simulations did warn me about that.
— Solid jj, Batman's Contingency Plans

A lot of times, a predator is trying desperately to catch his prey but the prey proves to be much too quick. How do you stop a creature that never stops moving? Have it run into a wall, of course! How do you do that? Simple, draw a tunnel over it.

So the villain takes his brush and creates a realistic looking tunnel in three seconds! The prey comes along and the villain hides behind a rock to see the creature stupidly run into the solid wall. The prey runs towards the tunnel and disappears into it. The villain may be baffled, but decides that he needs to go after his prey. He begins to run into the tunnel, and either crashes directly into the solid wall, or gets run over by a train or bus that has somehow come through the tunnel.

We usually never see where the prey ends up after entering the tunnel, nor is it ever made an issue.

Compare Portal Picture for when Applied Phlebotinum is involved and the characters are taken to Another Dimension. Also related to Art Initiates Life.