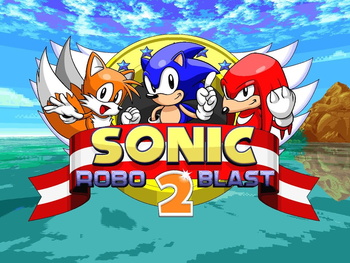 When it's done.
Click here to see the old title screen 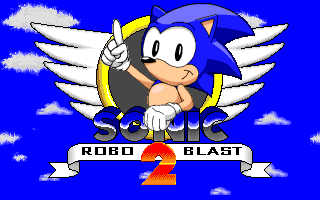 is a 3D freeware fangame based on the Sonic the Hedgehog games and created on the Doom Legacy engine. It was started in 1998, and has been in development ever since.
Advertisement:

It is a sequel to Sonic Robo Blast, a very crude fangame by a user named Sonikku. The original Sonic Robo Blast was created in the Klik and Play game making program, and was very primitive and quite buggy. Despite this, the game is full of secrets, and is renowned for being one of the first Sonic fangames ever created.

The sequel was originally intended to be a 2D game similar to its predecessor. This concept was scrapped when the team (at the time made up of users SSNTails and Sonikku) decided to make the game using the 3D Doom Legacy engine. Early tech demos featured basic Sonic gameplay but still showed its Doom origins. As more releases came out, the game consistently became more Sonic-like, as well as adding online netplay including Co-op in the single-player levels, a unique Deathmatch system, Capture the Flag, and racing.

In 2005, the inaccurately titled "Final Demo" Version 1.09.4 was released, and development was considered to have stalled for 4 years. In 2009, Version 2.0 was released and was the biggest update to the game, containing 7 new single-player levels, an overhauled Match system, and a lot of new options for level-developers. 2.1 was released in mid-March of 2014 after 4 more long years of wait, containing level updates, graphics revamps, new stages (single and multiplayer) and more. The current version, 2.2, released in December 2019 and heavily altered or remade most levels in order to include slopes (which wasn't previously possible on the engine) and bring their design and level of detail up to par with the Techno Hill Zone Act 2 redesign published 5 years before.

and donwload its latest version, but also archives of oldest versions. The same applies for its soundtrack.