Deface of the Moon 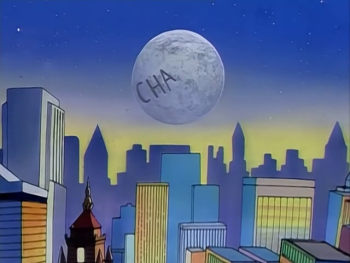 Chairface Chippendale's plan to write his name on the moon, though foiled by the heroes, was doomed from the start by his own poor font-spacing.
"We gotta go get the Moon. It can't be there right now. It's in the wrong place, the wrong time. We'll replace it with something far more beautiful! My face."
— Sleep Talkin' Man

Want to send a message to the whole Earth that you're awesomely powerful, and probably egotistic and evil, too? Or maybe you just want to show to absolutely everyone how much you care for your beloved? Just fire up your biggest laser cannon or longest-range missiles and use them to deface the Moon by blasting your face or INSERT YOUR MESSAGE HERE onto it. After all, the Moon has no weather or pesky tourists to mess it up... so any mark left on it, even if it's just etched into the dust, will probably remain there until the Moon itself is destroyed. Your message will be set in stone, pardon the cliché.

It doesn't have to be the Moon. Any sufficiently large and prominent landmark will do. In a pinch, you can use graffiti, as long as it's large graffiti; but lasers, missiles, or whirlwind carving are more stylish.

Rushmore Refacement is a sub-trope in which you are replacing someone else's face on a monument with your own.

Not to be confused with Detonation Moon, where the Moon is actually destroyed.