Literature / The Dream-Quest of Unknown Kadath 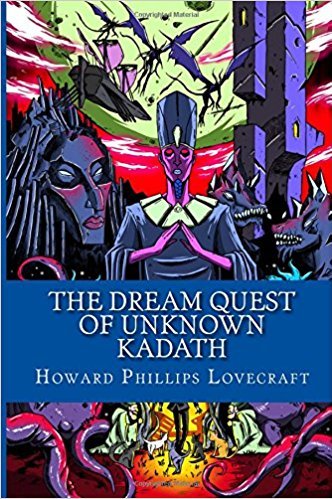 The Dream-Quest of Unknown Kadath is a novella by H. P. Lovecraft. Completed in 1927 but unpublished in his lifetime, it finally saw print in 1943. It is both the longest of his stories and a massive Crossover between the characters and locations of his Dream Cycle.

Uncelebrated writer and illustrious dreamer Randolph Carter dreams three times of a majestic sunset city, but each time he is abruptly snatched away before he can see it up close. When he prays to the gods of dream to reveal the whereabouts of the phantasmal city, they do not answer, and his dreams of the city stop altogether. Undaunted, Carter decides to use all his talents in the dream-world to find the legendary mountain Kadath, where the wiser Earth Gods live, in order to ask them for the location of his beloved sunset city. He initiates a quest through the depths of the Dreamlands, finding the weirdest things and meeting the strangest friends and foes.

Unknowingly to Carter, a powerful entity is bent on making him desist of his quest...