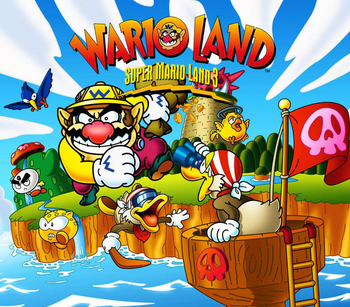 Wario: Getting the spotlight before Donkey Kong, Yoshi, Luigi, and Peach.
Be the bad guy.
Advertisement:

Since Wario is basically a Villain Protagonist — indeed, the game is often cited as the first from Nintendo to feature one — the game has no real noble goal. Instead, the game is based around Wario, hot off the heels of his previous failure to sieze Mario's castle, trying to get a lot of money in order to buy his own bigger castle and make Mario jealous. His main plan to do this? Steal a giant golden statue of Princess Peach that had been previously stolen by a gang of pirates, then sell it back to its rightful owners. There are Multiple Endings based around how much money the player accrued over the course of the game, something rather new at the time.

The gameplay, again, is markedly different from the original Mario titles, since Wario is much more combat-oriented. He can do a shoulder charge to defeat enemies, pick them up and toss them around, and use various power-up helmets to either attack enemies in new ways or explore the levels.

The game is available for the Nintendo 3DS Virtual Console.