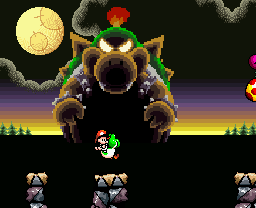 When he gets big, Baby Bowser isn't so cute anymore.
X: Oh no, you're a WALL NOW!
Sigma: That's right, X!
— Something About Mega Man X
Advertisement:

In Platform Games, you'll often meet a monumental boss who's about as large as the screen and stands in the background layer behind the platforms, facing toward the screen. It'll typically stand stock-still while swinging its Giant Hands of Doom or using a Breath Weapon or something. You may have to engage in a small Colossus Climb to reach its Weak Spot, (often its huge, grinning noggin), but in all cases the body of the boss (with obvious exception of its weak point and attacks) is not a threat even if the game features loose Collision Damage and your character is a One-Hit-Point Wonder.

In 3D games, these are much rarer due to the less obvious distinction between "foreground" and "background", but can still apply if the battle is fought at long range and it is (for whatever reason) impossible to actually close distance with the boss.

Due to the impressive difference in scale between these guys and everything else in the game, they are often the Final Boss, or at least a Climax Boss. As such, beware of minor spoilers in these examples!