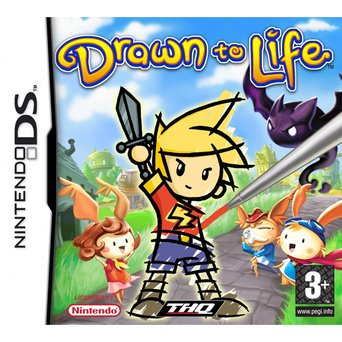 Drawn to Life is a video game series originally developed by 5th Cell and published by THQ. In this series you play as the Creator and must use The Power of Creation to help the "Raposa," the Fox Folk who inhabit the world.

In the first game: Drawn to Life, the Raposa village has been under attack by Wilfre, who covers the village in shadow. Mari then asks the Creator for help, and the player draws a hero to save the village. The hero must travel across the world, through the four gates in the village, defeating the shadow, returning the lost Raposa to the village, and collecting the missing pages of the Book of Life to restore the village to its former glory. The main gimmick of the series is that you get to draw a ton of stuff, including a whale-copter.

Drawn to Life: The Next Chapter followed, having two versions that have different plots. The version for the Wii takes place directly after Drawn to Life, but before Drawn to Life: The Next Chapter on the DS. The DS version features a much darker storyline, improved drawing functions, better platforming, no arbitrary outlines where you can only color things in... In addition, it's much harder and faster-paced, with a plot concerning color getting drained from the world. There is also a Compilation Rerelease of the two DS games called Drawn to Life Collection, with an alternate ending to the second game (though this ending is shown to be non-canon by the third game).

5th Cell, the games' original developer, went on to make Scribblenauts, which does to words what Drawn to Life did for images. The rights to the franchise were purchased in 2013 by 505 Games for $300K USD from the THQ auction, and a version for the Apple iPad was released with less than average results.

A third game, Drawn to Life: Two Realms, was developed by Digital Continue and released on December 7, 2020. It takes place five years after the events of the last game, and sees the players hero travel between the human realm and that of the Raposa.

Definitely not to be confused with Drawn Together. Not in the slightest.