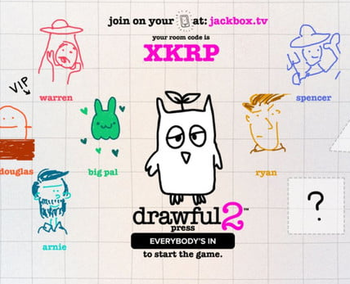 A Pictionary-like multiplayer game from Jackbox Games for mobile devices, released as part of the first Jackbox Party Pack in 2014. At the start of each game, players are given a (rarely straightforward) prompt to draw a picture for. After the drawing is done, players guess the prompt for each drawing; after all guesses have been submitted, all of them are then shown alongside the correct prompt. Guessing correctly earns both the guesser and the artist points, but choosing somebody else's guess scores them points instead. A sizable part of the fun comes from the limited color palettes and the lack of an erase function, making drawing pictures for certain prompts an exercise in hilarity.
Advertisement:

A sequel, Drawful 2, was released as a separate game in 2016. In this version, you can make your own episode for strangers to play (you make the prompts) and strangers who know your room code are freely permitted to join the audience. It was also ported to PC, PS4 and Xbox One later in 2016, and to Nintendo Switch in 2018.

A third game, Drawful: Animate, was announced as part of Jackbox Party Pack 8. It features new drawing tools and tasks players with producing simple two-frame animations based on the prompts they get.

, an .io Game equivalent to this game.

Drawful provides examples of the following: