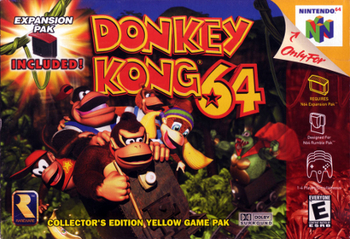 And you thought Insanity was Crazy.

So they're finally here, performing for you
If you know the words, you can join in, too
Put your hands together, if you want to clap
As we take you through this monkey rap!
Huh!
DK! Donkey Kong!
— The DK Rap

Donkey Kong 64 is a 3D platformer produced by Rare and Nintendo for the Nintendo 64, released in 1999. It is the fourth main game in the Donkey Kong Country series, and the last Donkey Kong game that Rare made before parting ways with Nintendo to join Microsoft. In it, Donkey Kong and a team of his friends; Diddy Kong, Lanky Kong, Tiny Kong, and Chunky Kong, must stop King K. Rool and his Kremlings from activating the Blast-o-Matic, a gigantic laser cannon with the power to destroy Donkey Kong Island.

The game resembles other platformers of its day, like Super Mario 64 and especially Banjo-Kazooie, in that it's mainly about exploring large nonlinear levels, fighting enemies, and picking up collectibles. Lots and lots of collectibles. Each of the five playable Kongs has five Golden Bananas and one hundred regular bananas to find in each level; the former open the way to other levels, whereas the latter open the way to each level's boss. Once all seven bosses are defeated, the path to the final gauntlet—and King K. Rool—is opened.

One of the biggest differences between Donkey Kong 64 and its spiritual predecessor is the decreased emphasis on running errands for NPCs. Most Golden Bananas are found by winning mini-games or solving simple puzzles (most of which involve hitting switches with the correct characters). Other members of the Kong family, like Cranky Kong and Funky Kong, help out by equipping the heroes with new moves, weapons, hints, and more.

Donkey Kong 64 is one of two Nintendo 64 games that require the Expansion Pak to run (the other being The Legend of Zelda: Majora's Mask). The higher-ups mandated

that Donkey Kong 64 be a Tech Demo Game for the Expansion Pak and the marketing stated that the game was simply too big to work on the base N64 hardware.

Following years of fan speculation that the game may never see a re-release due to rights issues regarding the Jetpac minigame, and possibly the original source code, the game became available on the Wii U's Virtual Console service in April 2015.