Hints Are for Losers 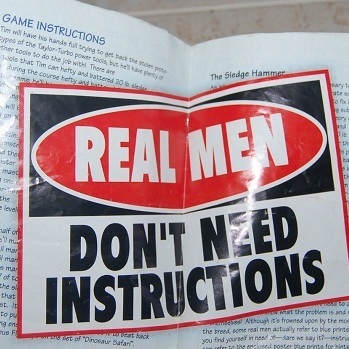 "Tough luck kid. I've been told to keep my mouth shut, as they want to keep all the good stuff for a money-making strategy guide. I'm sure some of it will appear on the newfangled 'internet' thing as well, so I suggest you take a look-see there. You could also ask your friends, assuming of course you've got any. If all else fails, you'll just have to play better."
— Cranky Kong, Donkey Kong 64 instruction manual
Advertisement:

A Video Game trope related to Easy-Mode Mockery, this is when a game (or related media, such as the instruction manual) taunts players trying to find help, either by inserting useless "hints" sections that only insult the player, by not providing help at all or by telling you to play the game like a real man if it does provide some sort of tips.

Especially common in older games, where it would be followed by an invitation to check out the new fancy Strategy Guide for only $50!

Contrast Annoying Video Game Helper, when you're sick of the game giving you hints all the time. See also Easy-Mode Mockery.