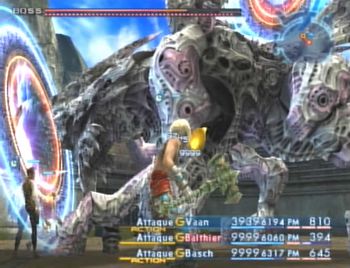 That guy's Life Meter contains a million hit points, and so do each of the bars underneath it. Halfway through the fight, he limits your damage output to 6,999 per hit, and he'll try to trick you into healing him during the last stage of the fight. You could leave, but he'll regain health while you're gone.
"[W]here do you get off being so impossible anyway? We spent more than half the game fighting you."
— Problem Sleuth

Some bosses can be taken out pretty fast. Not these. For these, well, you'd best make sure your schedule is clear for the day.

A boss fight which requires a significant amount of time to defeat. Can be related to Sequential Boss, as while one part of the boss isn't long, all the parts together are. Or it may simply be an extreme case of a Damage-Sponge Boss. God help you if it's both. Has a good chance of happening with Final and Bonus Bosses. See the Marathon Level for the level version of this, which may well have a Marathon Boss at the end.

These bosses frequently elicit cries of "Why Won't You Die?!" among players (especially if there is no indication of how much health it has left). Executed poorly, it's a Goddamned Boss with possible Padded Sumo Gameplay. Executed well, it's an epic and awesome boss that will keep your blood pumping. Contrast with Rush Boss, this trope's inverse. If you were looking for a Boss Marathon, that's a Boss Bonanza. Is often synonymous with the term "Raid Boss", which may be purposefully designed to be far too powerful for a singular player to fight, and instead requires an army of players to mitigate damage output and input.

Uses of this trope outside video games: