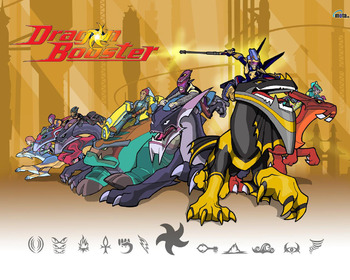 Dragon Booster (2004-2006) was a Canadian-created show from Nerd Corps Entertainment (as their first original animated series) that aired on CBC in Canada and the Toon Disney network in the U.S.

The series is about a Farm Boy named Artha Penn who becomes the legendary Dragon Booster, a hero who stopped a war between dragons and humans 3000 years before the present, and Artha must stop another from occurring by riding a dragon against other Dragon Riders in a series of Twisted Metal-style racing combat events. In the way of his quest is the evil Word Paynn, who seeks to cause a new dragon-human war, then dominate whatever happens to be left of the world afterwards.

The show was originally planned for five seasons, but did not get beyond the three that were commissioned due to no more being ordered (probably due to lack of viewership and toys being sold). Nonetheless, the series does have a surprisingly resilient fanbase, although it helps that this was made by former Mainframe workers.

Not to be confused with a certain Diep Io build.