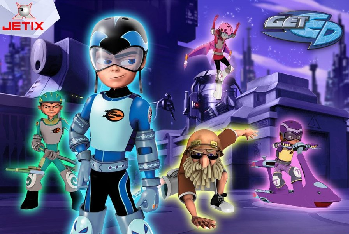 "When there's a need for speed, Get Ed''
— Tagline
Welcome to Progress City - a utopia of the far future where towering skyscrapers, flying vehicles, and robots are commonplace. Courier companies race through this gargantuan metropolis to deliver all sorts of technologies and marvels to the populace, and one of the best in the business is Dojo Delivery. Run by Anthony Ol' Skool, Dojo Delivery's employees are an oddball gang of teenagers brought under Ol' Skool's protection and mentorship, including The Leader Burn, Action Girl Deets, diminutive Gadgeteer Genius Fizz, and Loogie, who is... well, Loogie. Their newest employee however is Ed, a boy with superhuman reflexes and no memories of his childhood who tends to experience sudden clairvoyant visions and often receives mysterious equipment far more advanced than anything Progress City has to offer from unknown benefactors.
Advertisement:

Ol' Skool guarantees Ed that he will learn about his identity and origins someday, but for now, Dojo Delivery focuses on their day-to-day courier jobs. And really their line of work would be a lot easier were it not for Progress City's ultimate evil — Mr. Simon Bedlam, a greedy and ruthless industrialist who seeks complete control of the city by getting his hands on any valuable technology and information he can use to expand his holdings. Ed and his coworkers must use their skills to not only get every hi-tech package delivered on time, but to stop Bedlam's evil schemes. But Bedlam will not tolerate being constantly outsmarted by a mere courier crew, and in particular, he is fascinated by Ed himself, believing that he will gain the advantage he needs to rule Progress City if he can get to the bottom of the mystery surrounding the boy — if he can get Ed.

A Canadian-American All-CGI Cartoon created by the late Canadian animator Andy Knight (who also created Ned's Newt, Pig City, and later Bolts & Blip, for Teletoon), Get Ed debuted in 2005 as part of the Jetix programming block on Toon Disney and ABC Family in the United States, and Family Channel in Canada. Produced by Jetix Concept Animation and Canada's Red Rover Studios (Andy Knight's very own studio), it was Jetix's second original series (after Super Robot Monkey Team Hyperforce Go!), running for a single season of 26 episodes.