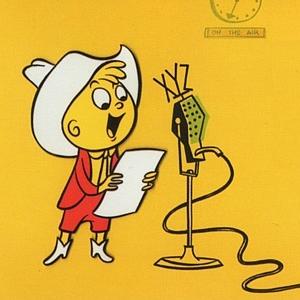 The best way to identify United Productions of America is to say "They're the people who made Gerald Mc Boing-Boing." And the best way to identify the quality of their product is to say that every time you see one of their animated cartoons you are likely to recapture the sensation you had when you first saw "Steamboat Willie", the early Silly Symphonies, "The Band Concert" — the feeling that something new and wonderful has happened, something almost too good to be true.
—Gilbert Seldes
Advertisement:

Gerald McBoing-Boing was a 1950 7 minute Animated Adaptation of a Dr. Seuss record of the same name (originally narrated by Harold Peary, in character as The Great Gildersleeve). It was about a young boy named Gerald McCloy who only spoke in sound effects. Unlike other cartoons at the time, this used a more cartoonish, simplistic style and Limited Animation, although this was more a stylistic choice than a way to save money. It became the first successful theatrical cartoon produced by UPA. Three more Gerald shorts would be produced over the next six years. The complete list:

There was also a short lived primetime animated cartoon (the first ever, too, predating The Flintstones by 3-4 years) in 1956. Aside from a few appearances in a couple of Mr. Magoo shorts, and playing the role of Tiny Tim in Mr. Magoo's Christmas Carol, Gerald would fade to obscurity soon afterwards.

In 2005, he returned in a new series that aired on the Canadian channel Teletoon, as well as on Cartoon Network's short lived pre-school block, Tickle U. Joined by his family, two speaking friends, Janine and Jacob, and a dog named Burp. It featured short sketches with him interacting with the world around him and his friends, sound checks (with animals and other objects switching sound effects) and fantasy tales in between featuring him, Janine, and Jacob, being told in Seussian Rhyme like the original shorts. However, unlike the UPA shorts, Gerald is instead praised for his sound-making abilities.

Tropes found in the second and third "McBoing-Boing" cartoons:

The 2005 animated series has examples of the following.