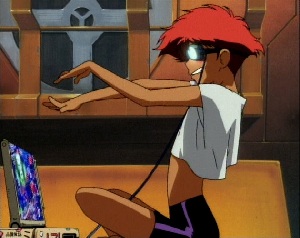 And here we see Cowboy BeBop at His Computer.
"What's more important, the data or the jazz? Sure, sure, 'Information should be free' and all that—but anyone can set information free. The jazz is in how you do it, what you do it to, and in almost getting caught without getting caught. The data is ones and zeroes. Life is the jazz."
— Datatech Sinder Roze, Sid Meier's Alpha Centauri, "Infobop"
Advertisement:

As opposed to the malicious Cracker who uses his computer skills for profit and mayhem, the Playful Hacker normally wants nothing more than to explore new territory on the Net and learn new things. Sometimes, he plays harmless pranks which can cause clueless authority figures to confuse him with his dark counterpart. Even when his actions are not strictly legal, though, his intentions and presence are almost always benign — even heroic. This is what "hacker" used to mean before mass media mutated it.

The Playful Hacker usually owns a Magical Computer, which allows him or her to do all manner of things impossible to normal computers and users, especially when engaging in Rapid-Fire Typing. (See Hollywood Hacking.)

He may or may not be a Mad Scientist depending on who you ask. Chances are a more-benign Playful Hacker might turn out to be a Reluctant Mad Scientist or a Stupid Scientist. Modern iterations may also be Tech Bros.

See also: Everything Is Online, It's A Small Net After All, Omniscient Database.