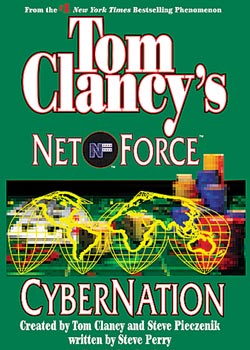 Net Force is a series of technothriller novels developed by Tom Clancy and Steve Pieczenik, and written by Steve Perry and Larry Segriff, chronicling the work of an FBI cybercrime unit tasked with protecting the world from terrorists and hackers.

The original novel begins with the original Director of the unit being assassinated, and unit member Alex Michaels being promoted to Deputy Commander and tasked with discovering the plot behind his friend's death. Along with team members Assistant Director Toni Fiorella, programmer Jay Gridley and Net Force military commander General John Howard, Michaels discovers a Russian hacker's plot to wreak havoc on cyberspace and buy governments using illicit money from security contracts, along with an assassin who is trying to kill him.

In total, 10 books were written in the series, along with a Spin-Off series called Net Force Explorers, which followed a group of young hackers who protected cyberspace from various threats.

The series has several similarities to Clancy's other licensed series like Op-Center, although it was aimed at adult audiences (whereas Explorers was aimed at the young adult market). An made-for-TV adaptation of the first novel was produced in 1999, starring Scott Bakula as Alex Michaels, and changing many elements from the original book.