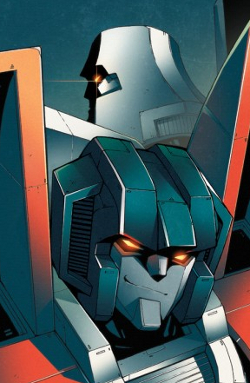 "I've always got Megatron's back..." note "in my sights!"
"Every tyrant has a hungry right hand."
— Emanja Mora, Wiseguy, "Blood Dance"
Advertisement:

A certain type of character falls outside the pattern: a villain too ambitious or individualistic or just too stubborn to accept the supremacy of the Big Bad. Instead, this villain actually dreams about overthrowing the guy everyone else fears and taking his place. Sometimes he is a (grudging) servant of the Big Bad; sometimes he is entirely outside the established power structure. In rare Noble Demon or Anti-Villain cases, he may be actually loyal to the Greater-Scope Villain, and feels his direct boss isn't. In any case, if the Big Bad ever stumbles or shows weakness, the Starscream will be there, ready to kick him out of the Astrotrain. A good way to tell a true Starscream apart from the run-of-the-mill opportunists who ally themselves with the Big Bad hoping to share in the spoils (and who would only take over if they were given the chance in a golden platter) is through his emotions. If he is privately seen boiling with anger and seething with hatred over his boss ordering him around and being forced to say "Yes sir," all the time, then his supposed boss should watch out for him. The dominant trait of a Starscream is resentment at being a sycophant and this bitterness is proof that he is the real thing.

In some cases, the Starscream may actually start the series as a staunchly loyal supporter of the Big Bad. Unfortunately, when the boss turns out to be an inept General Failure who's more interested in juggling the Villain Ball than actually succeeding, the Starscream becomes fed up with the boss's idiocy and decides that the villainous organization would be more successful with him in charge. A former Big Bad who has been Demoted to Dragon by a new, bigger and badder villain is very likely to become the Starscream as well, biding his time while plotting against the new Big Bad in order to reclaim his former seat of power.

If The Starscream succeeds in taking over the mantle of Big Bad from his superior, the former Big Bad may have actually been a Disc-One Final Boss. If he was consistently portrayed as the more dangerous or important of the two to begin with, then he's also a Dragon-in-Chief. Many a Dragon-in-Chief doesn't care about openly taking over because they know that they really are the ones in charge and the real Big Bads even though some are too egotistical to pretend any longer and go on full betrayal mode. If it turns out that the apparent Dragon was the true Big Bad all along, using his "boss" as a decoy or puppet for his schemes, then he is The Man in Front of the Man.

Often involves Nice Job Fixing It, Villain. All examples prone to suffer from Chronic Backstabbing Disorder. A Starscream's chances are better if he's a Chessmaster Sidekick. A particularly brilliant Starscream might choose to play the Long Game as he patiently waits for his chance to seize power. If the Starscream waits until after his master is eliminated by outside forces to make his move, see Evil Power Vacuum.

Important Note: This trope has been subjected to some misuse. This trope only applies when the Big Bad's Underlings are actively trying to take his or her job. If for example you have a Decadent Court where everyone holds the King or Queen in high regard and is constantly vying for their approval rather than their position, then that's not this trope.

Sub-trope of Evil Versus Evil. Opposite trope of The Creon, who will do anything in his power to stay second-in-command at all costs. Contrast Sarcastic Devotee, Professional Butt-Kisser, and Villainous Friendship (where The Dragon and the Big Bad trust each other as friends). For instances where everyone is a Starscream, see Deck of Wild Cards.

It also seems Starscream himself has a few things to say to us here... whatever they are, they'd better be related.