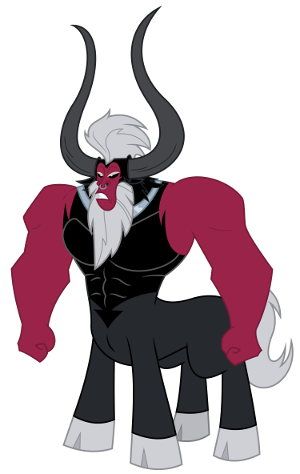 "How does it feel, knowing that soon every pegasus, unicorn and earth pony will bow to my will?"
"I am Lord Tirek. And I will take what should have been mine long ago."
Debut: "Twilight's Kingdom - Part 1"
Voiced by: Mark Acheson

Long ago, Tirek and his brother Scorpan came to Equestria with the intent to steal the magic of every pony and Take Over the World. Scorpan however learned friendship from Star Swirl the Bearded, and helped the ponies seal Tirek in Tartarus. However, when Cerberus left Tartarus undefended, Tirek broke free, and is now ready to pick up where he left off.

Expanded Universe comic My Little Pony: FIENDship Is Magic #2 explains that of his centaur race, a young Tirek possessed even more magical ability than his father King Vorak. Already thirsty for power, his goals turned towards Equestria after seeing the power that unicorn ponies possessed when hermit Sendak the Elder returned from his travels with an abducted unicorn. The comic shows that Tirek's mother, Queen Haydon is a gargoyle like his brother Scorpan, and that Discord was a member of Vorak's council, explaining their previous familiarity.

For tropes applying to his G1 counterpart, see My Little Pony TV Specials.

open/close all folders
Tropes A to F
Tropes G to O
Tropes P to Y
Advertisement: