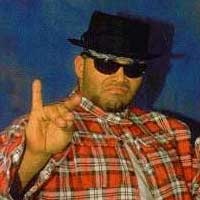 Charles Ashenoff (born Carlos Santiago Espada Moises, January 6, 1964), best known as Konnan, is a Cuban-born, American-based professional wrestler best known for his time working for both major lucha libre promotions in Mexico, CMLL and AAA (the latter he helped co-found), and also known in the United States for his time in WCW and TNA.

Starting as El Centurión in Lucha Libre Internacional, he felt the UWA was holding him back there and later adopted the name Konnan el Barbaro in CMLL, quickly becoming a main event star after losing his mask in a moving story where his crying "brother" went to the ring to physically remove it; Konnan later became the first CMLL World Heavyweight Champion. After a falling out with the company, he and booker Antonio Peña started a new company, AAA. In AAA he further cemented his stardom while behind the scenes, he and Peña introduced future stars such as Rey Mysterio Jr., Psicosis, and La Parka.

In 1996, after several appearances for the company in the past several years, he became a full time performer for WCW. He portrayed a charismatic, urban character, often rapping and reciting catchphrase-laden promos. Behind the scenes, he became a liaison between WCW and AAA, again bringing wrestlers like Rey and La Parka to prominence. After WCW's demise, he later joined TNA, forming teams such as Latin American Xchange and 3Live Kru. He was a big part of season 1 of Lucha Underground as the mentor and adviser of Prince Puma before being killed off.

"Yo yo yo let me speak on dese tropes!":