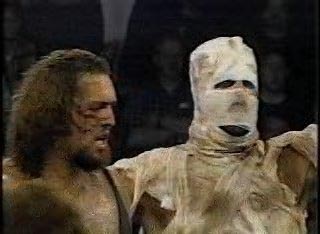 The Giant and the Yeti at WCW Halloween Havoc 95 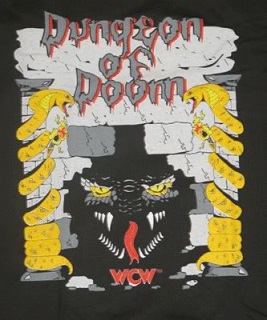 The Dungeon of Doom was a Professional Wrestling Power Stable that existed in WCW from May 1995 to July 13, 1997. It developed out of the short-lived Power Trio the Three Faces of Fear (Kevin Sullivan, the Butcher and Avalanche which existed from late October 1994 until April 1995. At WCW Slamboree 95, May 21, 1995, Sullivan d. The Man With No Name (Butcher). After the match, The Master (Curtis Iaukea - no relation to Mike "Prince Iaukea" Haynor) appeared on the video screen ranting about Hulkamania and how it needed to be stopped. Sullivan ran through the crowd and out of the arena. This led to a vignette showing Sullivan running through a forest with the Master calling for him. Then Sullivan disappeared and reappeared at the Master's feet inside the Dungeon, with the Master talking about how the "warriors were gathering." Sullivan said that he didn't want to disappoint the Master, but "no one can defeat the Immortal Hulk Hogan, no one." The Master told Sullivan, whom he called his "SONNNNNNNNNN," to take "the final step," leading to Sullivan running toward another area of the Dungeon. He reemerged in a red robe as "The Taskmaster," calling the Master "Father" and saying that he knew what his "Father" meant when he said that it was etched in STOOOONNNE!!!!! Over the next few weeks on WCW TV, the Master would present different warriors to be used to destroy Hogan, starting with Kamala (his WCW debut), the Shark (Tenta), the Zodiac (Beefcake), Meng and, most importantly, the centerpiece, The Giant.

During the feud with Hulkmania, the Yeti and Lex Luger were added to the Dungeon's lineup. Additionally, The Shark would be kicked out of the group after he decided to go after the WCW World Title even though it was held by The Giant, and Zodiac would quit after it turned out he was a spy working for Hogan sent to infiltrate the group. After the New World Order angle took off, the Dungeon languished as the home of midcard and lower midcard heels who weren't doing anything better at the time. During this period of time Hugh Morrus, The Barbarian, The One Man Gang, Loch Ness, Maxx Muscle, Braun the Leprechaun, Konnan, and managers Jacqueline and Jimmy Hart would join. The Dungeon officially disbanded when Kevin Sullivan lost a career vs career match with Chris Benoit in mid 1997.

Jimmy Hart would form a Spiritual Successor stable called the First Family (reviving the name of his stable from when he was a top heel manager in Memphis in the early 1980s) with Dungeon alumni Meng, Hugh Morrus and the Barbarian, along with Nasty Boy Brian Knobbs and Jerry Flynn. Although Meng was the initial Centerpiece of the stable, he'd get arbitrarily kicked out of it at the start of 1999 and the stable never found a replacement Centerpiece. The First Family seemed to be in line for a fairly significant push, but a combination of injuries to its members and the hiring of a new booking staff headed by Vince Russo caused the stable to quietly disband.

Sullivan would form a second DOD in USA Pro (later renamed USA Xtreme) Wrestling in New York City with Gangrel, Luna Vachon (who got her start in Sullivan's Army of Darkness in Florida in the 1980s), the Wall (Jerry Tuite), "Psycho" Sam Dudley (Mark Vartanian- who had teamed with Big Dick Dudley, thus giving him a connection to the Dudleys) and "Hardrock" Ken Sweeney.

Championships won by DOD members while IN the DOD:

Not to be confused with the Roguelike The Dungeon Of Doom.