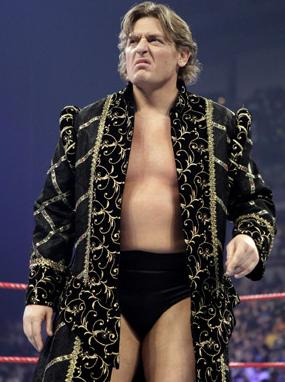 "I've never had a drop of integrity, what did it hurt me?"
Advertisement:

William Regal (born Darren Kenneth Matthews on May 10, 1968 in Codsall Wood, Staffordshire, England) is a retired English professional wrestler best known for working for WWE as the general manager of NXT, and is arguably the biggest British wrestling star since the heyday of Davey Boy Smith. With a career spanning three decades all over the world, he gained the most fame and success in WCW in the mid-1990s as Lord Steven Regal and later WWE, which he joined in the final year of the famed Attitude Era and has remained since: first (and briefly) as Steven Regal the "Real Man's Man", and later (and since then) William Regal. For a long time he was the most senior member of the full-time talent roster going by ring experience, having been in the business longer than several prominent WWE Superstars (such as Cody Rhodes) have been alive.

Regal has seen quite possibly everything there is to see about the wrestling business, being one of the few wrestlers active today to have started his career as a legitimate submission wrestler on the British carnival circuit. He's one of the best in the ring, best on the mic, and knows how to tell a story in the ring. However, he's also seen the darker aspects of the business, particularly an almost crippling drug addiction that's unfortunately common in the wrestling business. He has since cleaned up and is arguably the greatest success story of WWE's Wellness Policy. Due to these facts, he's a favorite of diehard fans and smarks.

While William Regal was never a world champion, he has extensively trained several future world champions employed by WWE. You might have heard of them. Regal's final match came in 2013 against Antonio Cesaro on NXT, after which he became the General Manager of the black and gold brand. After 9 years in the position he was released at the start of 2022 as part of WWE's ongoing attempts to scrub all traces of the former black-and-gold brand from NXT 2.0. He debuted for All Elite Wrestling at Revolution 2022.

Among his in-ring achievements, he is a 4x WCW World Television Champion