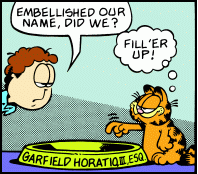 Want to make your character sound wealthy? Just give them a snobby rich kid name.

In American works, this is for those names like Chase (or Chace), Blair, or in older programs, Libby (which is a name more strongly associated with commoners now). For extra pretentiousness points, add a Roman numeral at the end to indicate that the name itself is a legacy. "The Third" seems to be the most popular. Occasionally, first or middle initial is seen (as in, for instance, "V. Marcus Wellesley" or "Harrison E. Vandenberg"). Girls may also be given traditionally male names such as Spencer, Logan, or Blake. Men with names like Stacey or Ashley also apply. The character may also have more than one middle name. Their last names will often be of more than one word such as St. John, St. Claire, or a Dutch heritage name like Van (de/der) -something or Something-son/sen (even all in one), especially if the character is supposed to be a New Yorker, (see, e.g., Dyckman, van der Woodsen). Most often, the last name will suggest a British heritage to lend that all-important Founding Fathers touch, and will often be derived from a British place-name — Hastings, Winchester, or Montgomery, for example.

If the setting and characters are British, these types of names would be described as "posh", "rah" (as in "tally-ho, rah!", a stereotypically posh exclamation), or "Sloaney" names, the latter named for London's Sloane Square, an upper-class haunt. Unlike in the US, Roman numerals would never be used, and would be viewed as uppity and extremely vulgar. Given names will be either very traditional — think Royal names like William (Wills), Henry, Rupert, Catherine, Elizabeth, Victoria OR more unusual, quite eccentric names like Rafferty, Rollo, Crispin, Finnbar, Tarquin, Torquil, Candida, Arabella, Pandora, Binky (yep) and Cressida (etc) that sound like something straight out of Arthurian legend or Shakespeare. The surname will usually be peculiarly spelled, often in a way that defies sense, and will always be hyphenated — commonly known as a 'double-barrel' surname — sounding as though it could be the name of a particularly expensive law firm if you slapped "LLP" on the end — Cholmondeley-Browne, fforbes-Hamilton, Wyndham-Pryce, etc. Essentially, an English girl called something like "Araminta Georgina Fortescue-Thompson" probably has a flat on Sloane Square, does a bit of light PR as a "job", spends most of her time shopping on the King's Road, and has a family that owns half of Yorkshire.

Note — although preppy last names in the US and UK will be very similar (preppy last-names in the US will often suggest a British heritage), it's worth mentioning that there is a huge degree of cultural dissonance between the nations in terms of what are considered to be preppy / upper-class first names. For example, girls' names thought of as being preppy in the US, like the aforementioned "Chace" or "Blair", would be thought of as being tacky, overly "trendy", and at worst, flagrantly nouveau riche in the UK (especially "Chace" spelt with a second "c"). Sometimes they will even be thought of as lower-class. But equally, to a US audience, "Sloaney-pony", posh English girls' names like "Henrietta", "Jemima", or "Arabella" sound parochial, old-fashioned, and evoke down-home, country-bumpkin types — funny, ain't it? There's also a whole segment of Celtic (mostly Irish) boys' names that are considered "chavvy" in England and quite smart in the New World — Aidan, Liam, Kieran and the like.

Royal names are another example of this latter phenomenon. In the late 19th Century, there was a fashion for Victoria/Victor and Albert/Alberta in honour of the queen and her husband. By the time the first Steptoe and Son movie was made, 'Arold (Son) told Albert (Steptoe), with reference to the baby they had adopted, "Naw, we're no' callin' 'im Albert; 's common!"

Compare Pretentious Pronunciation, which overlaps with this sometimes when people intentionally mispronounce a name just to make it sound more classy. A trademark of the Upper-Class Twit and Gentleman Snarker.

Ghetto Name is the polar opposite (yet has a knack for sounding just as stupid). Hayseed Name is the rural equivalent to both, encompassing names unique to regions considered backwoods and uncultured. May overlap with Hippie Name if the character is a Bourgeois Bohemian. Wealth's in a Name is a sister trope that incorporates words related to money to make the character's financial status obvious.