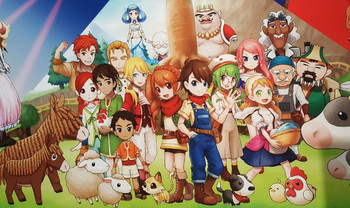 Harvest Moon: Skytree Village is the sequel to Harvest Moon: The Lost Valley. Like its predecessor, it is a Harvest Moon title created by Natsume rather than Marvelous Entertainment and was released on the Nintendo 3DS.

The game takes place in Skytree Village. For reasons unknown, the Harvest Goddess began to lose her powers. The villagers began to lose their memory of her and moved away. The protagonist is a farmer tasked with reviving the seven Skytrees and restoring the land, and the goddess, to their former glory.

Skytree Village uses a different art style from the previous two Natsume Harvest Moon games. Several characters from the previous games reappear in this title. Amongst the games improvements over The Lost Valley and Seed of Memories include upgraded tools, the ability to task Harvest Sprites to grow your crops, new crops, more Character Customization options, and the Poitou Donkey animal.