Literature / America Is Not the Heart 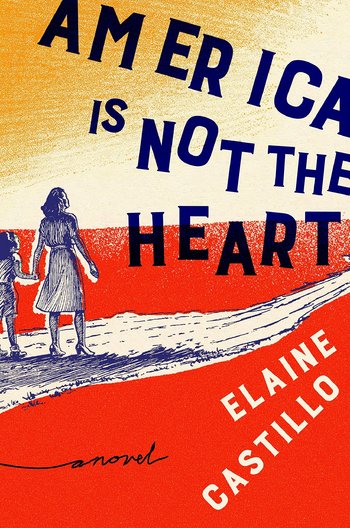 A 2018 Doorstopper novel by Filipino-American author Elaine Castillo, and her first novel, America is Not the Heart is, at … heart, a Generational Saga centred around the de Vera family, whose ancestors and in-laws originally hail from the Ilocos region in the northwest of the Philippine island of Luzon, but whom history's cards send first to the capital in Manila, through sundry hinterlands across the rest of the island, then ultimately to Milpitas in the San Francisco Bay Area—a common rite of passage for Filipino immigrant families in the United States.

Starring roles in that family include: Paz, who grew up in Pangasinan province, studied hard to become a nurse and was first to settle in California; Pol, her surgeon husband, who aspires to resume his medical practice in his old age; and two girls both named Geronima, cousins to each other though separated by some decades and a childhood on opposite sides of a world and a colonial empire by any other name. The older Geronima, a medical student in Manila who dropped out to join a Communist rebel insurgency against the then-incumbent dictatorship of Ferdinand Marcos, also goes by "Nimang", but upon her move to America is eventually rechristened "Hero" by the other, younger Geronima—"Roni", Paz and Pol's daughter, who's starting first grade when, in 1990, Hero flies into her and her parents' lives (again, in the case of Pol, her uncle). The same flight also lands her into the life—and heart, eventually—of Rosalyn, a makeup artist and hairstylist, who was all of four years old when her own family left the Philippines and settled in Milpitas too.

Here, geographically, temporally, and emotionally distant from her old lives in the old country, Hero would rather move on, get a new job, live a new life, and she isn't one to offer up ancient tales of privileged youth in Vigan and Manila, and firsthand repression and deprivation in the Cagayan Valley, unless prompted. The problem is, it's easy to keep her mouth shut, but much harder to hide her scarred hands—and when Roni with her unfiltered curiosity, and Rosalyn with her growing infatuation, both notice and ask the inevitable, what's Hero gonna say?

The title is a play on words from the title of America is In the Heart, a famous classic Filipino novel about migrant working life in America, written by Filipino labourer and author Carlos Bulosan.

Now with a character page that needs more love.