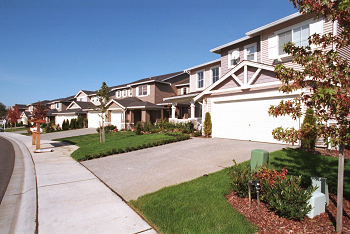 of Daly City, a suburb of San Francisco.
Advertisement:

The place where the Dom Com usually lives.

People live in houses that, while not exactly palatial, are still a lot bigger than they ought to be. Most of the houses look alike, having been built according to the same two or three plans. Instead of a Main Street like most small towns, a suburb will have The Mall, be it a big, enclosed shopping center or a strip mall with a Walmart. You can walk or ride a bike to a few places, but not most of them, so plots involving the availability of a car (such as the Very Special Episode about drunk driving) are possible.

Depending on the genre, Suburbia may also be home to a ragtag band of kids, talking animals, and cool Elders; sometimes, all three may be there together! In less satirical examples (see below), Suburbia may be the staging point for a City of Adventure, especially if it borders The Big City.

A deep well of satire and (often not very affectionate) parody, especially from disaffected youth. In the middle of the 20th century, the American intelligentsia were obsessed with attacking the actual and perceived shortcomings of suburbia. By the nineties, the idea of satirizing suburbia was so ingrained in American culture that it was itself satirized. The fact that we have an entire trope about this, Stepford Suburbia, speaks volumes about the way many Americans view the suburban lifestyle.

For examples in fiction where all of the houses look basically alike, see Cut-and-Paste Suburb.