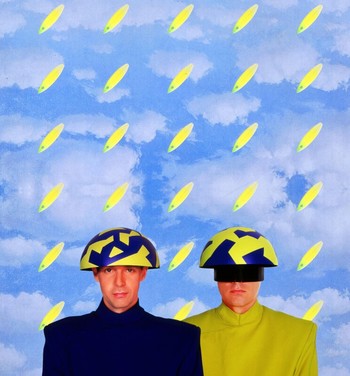 "We were never being boring — we were never being bored."
"I was faced with a choice at a difficult age,
Would I write a book? Or should I take to the stage?
But in the back of my head, I heard distant feet,
Che Guevara and Debussy to a disco beat."
— "Left to My Own Devices"
Advertisement:

Pet Shop Boys are a British pop duo formed in 1981, when Blackpool native Chris Lowe and Newcastle native Neil Tennant met by chance in an electronics store. Singer Neil and keyboardist Chris rocketed to fame with their first international hit, "West End Girls", in 1986, and dominated the #1 spot in the pop charts in Britain for another two years.

The two became famous for their unique sound, which they famously described as "Che Guevara and Debussy to a disco beat". Behind the intensely danceable beats lie Chris Lowe's subtly skillful compositions and Neil Tennant's poetic lyrics. Tennant, a former editor and journalist for the music magazine Smash Hits and a professed bibliophile, gives a lot of the songs a literary bent.

Despite popular misconceptions due to Tennant's typical dry delivery, their music is not inherently ironic. While they have done a few ironic songs ("Opportunities"), a surprising proportion of their songs are honestly emotional. Another interesting bit about their music is that Neil often plays a character in their songs, and not necessarily a male character. In "I Made My Excuses and Left", for example, he sings as Cynthia Lennon walking in on John and Yoko and realizing her marriage is over.

They are also successful producers and collaborators, having produced Dusty Springfield's Reputation and Liza Minnelli's Results, and having co-written or produced songs for Tina Turner, David Bowie, Robbie Williams, Electronic, Girls Aloud, Kylie Minogue, and The Killers. Many other artists are fans and have publicly cited them as influences, including Madonna, The Killers, Coldplay, George Michael, Belle and Sebastian, and, curiously enough, Axl Rose and Trent Reznor.

Since "West End Girls", the duo have released fourteen studio albums and in 2009 received the "Outstanding Contribution to Music" award at the BRIT Awards.

You can now vote for your favourite Pet Shop Boys album by heading over to the Best Album crowner.

They have also co-written and produced a musical, 2001's Closer to Heaven, starred in a film, 1987's It Couldn't Happen Here, written a new score for the classic movie The Battleship Potemkin in 2004, and premiered a ballet, The Most Incredible Thing, in March 2011.