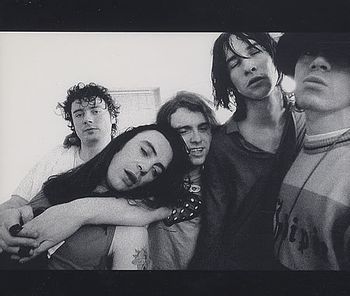 Primal Scream are a Scottish Alternative Rock band, known for their eclectic, experimental sound, their status as Promoted Fanboys (much like Oasis, come to think of it), their Sex, Drugs and Rock & Roll lifestyle and high turnover rate of members. Oh, and also their really interesting, excellent music.

For the sake of expediency, their core and current lineup is as follows:

Phase One: What Are We Doing?

Primal Scream's long and slightly complicated history begins in 1982, when frontman, vocalist and chief mastermind Bobby Gillespie joined forces with his guitarist friend Jim Beattie. At first, PS was merely something Gillespie did in his spare time, with his full-time job being drumming for The Jesus and Mary Chain (he's the one who plays drums on Psychocandy). However, the band's lineup quickly expanded to include Robert Young on bass, Stuart May on guitar, drummer Tom McGurk and tambourine player Martin St. John. PS got a contract with notable alternative label Creation Records note My Bloody Valentine, The Jesus and Mary Chain, Saint Etienne, Ride, Oasis and released a single, "All Fall Down". Gillespie was then given an ultimatum to either dissolve Primal Scream and join JAMC full-time or resign, choosing the latter option.

While Primal Scream did gain some publicity from contributing the song "Velocity Girl" to the C86 compilation, the band suffered from lineup instability, with the lineup eventually paired down to Gillespie, Young, Beattie, Innes and a new drummer. Their debut Sonic Flower Groove suffered from a torturous birth, being recorded at two separate studios with two separate producers and costing a total of £100,000, having nothing to show for it besides a batch of dull, jangly The Byrds photocopies. The album barely got into the charts and received terrible reviews, prompting more resignations from the band.

Gillespie, Young and Innes regrouped in Brighton and made some more changes - Young moved to guitar, and a new rhythm section of Henry Olsen (bass) and Toby Tomanov (drums) was brought in. The lads also threw out their bright jangle pop for hard-edged, rock that drew from MC5, The Stooges and The Rolling Stones. The resulting album, Primal Scream, was greeted with confusion from their older fans and worse reviews. Shortly after the album's release, Felt keyboardist Martin Duffy joined the band as a full-time member.

Phase Two: We Figured Out What We're Doing...Kinda

In their spare time after Primal Scream, the band's members developed a taste for the then-thriving English acid house/rave scene. While attending one rave in 1990, they met DJ and producer Andrew Weatherall, who they asked to remix their song "I'm Losing More Than I'll Ever Have". Weatherall completely revamped the song with additional samples and turned it into a groove-focused dance-rock song. Now retitled "Loaded", it became the band's first big hit.

Primal Scream entered the studio with a Dream Team's worth of producers including Weatherall, ambient house duo The Orb, Hugo Nicholson, Hypnotone and The Rolling Stones knob-twiddler Jimmy Miller. The result, Screamadelica, was a massive genre stew, smashing together Alternative Rock, Psychedelic Rock, acid house, gospel and dub and including several nods to their influences ("Movin' on Up" borrowed lyrics from "Yoo Doo Right" from "Monster Movie" (1968) and a cover of "Slip Inside This House" by The 13th Floor Elevators). With the music's quality strong enough to weather its amateurish-looking cover, Screamadelica became the band's first successful album.

The resulting long tour in support of Screamadelica was mired by drug abuse, and a quick EP named Dixie Narco started a move away from dance-rock, towards blues-rock and P-Funk instead. Primal Scream next spent circa two years recording new material in London and Alabama, with an even more eclectic cast of collaborators that included Tom Dowd, George Drakoulias and George Clinton behind the mixing desk, keyboardists Jim Dickinson and Benmont Tench, drummer Roger Hawkins and The Memphis Horns. The new material reverted to the band's traditional method of copying its influences - in this case, The Rolling Stones, The Faces, and numerous Funk bands. Give Out But Don't Give Up accordingly received mixed reviews - for every person who liked it despite its derivative nature there was one who agreed with NME's famous review that called them "dance traitors". Its failure on the charts and a long tour led to severe band tension and a long hiatus.

Primal Scream returned in 1997 with a new lineup, including former The Stone Roses bassist Mani and drummer Paul Mulraney. Reuniting with former collaborators/producers Brendan Lynch and Andrew Weatherall, Vanishing Point saw the band return to the electronic-rock fusion they found success with, but this time with a Darker and Edgier bent and a bigger influence from Krautrock, Trip Hop and dub - quite appropriate for an album inspired by the film The Vanishing Point. With this, Primal Scream Won Back The Crowd they lost with Give Out.

For their follow-up XTRMNTR, their final album with Creation, the band recast themselves as angry-political revolutionaries, matching Anvilicious, clumsy sociopolitical lyrics with the hardest, harshest songs they ever wrote, drawing inspiration this time from Industrial Metal. The album featured contributions from Bernard Sumner, Brendan Lynch, Adrian Sherwood, The Chemical Brothers and Kevin Shields, the latter of whom continued to work and tour with the band for a while. Shields was never an official member of the band however, since My Bloody Valentine never actually broke up and Primal Scream never actually clarified if he was a member. They continued in this direction with Evil Heat, which boasted a similarly impressive list of contributors - Jim Reid, Robert Plant, former member Paul Harte and... er, Kate Moss. She was part of the package.

Soon after Heat, Shields ditched the band to return to doing absolutely nothing and eventually reuniting My Bloody Valentine. The band carried on regardless, doing yet another Stones-Faces-whatever photocopy album called Riot City Blues (with predictably bad reception) and an electro-Krautrock album called Beautiful Future. Longtime guitarist Young left sometime after Blues.

Their tenth album More Light was released May 13, 2013, returning the band to dancey psychedelic rock and consistently positive critical reception.