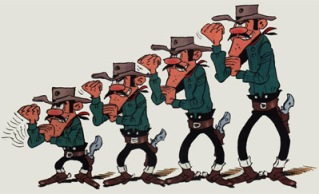 The dark side's version of the Sibling Team — criminals who take brothers or sisters along for the ride. They sometimes end up looking like a fraternal version of an Outlaw Couple, also typically a pair. Sometimes they can play off each other as Morality Pets or at least Humanity Pets while other times their partnership can be begrudging underneath or have them tripping over Sibling Rivalry.

Can overlap with Big Bad Duumvirate, may involve Sibling Yin-Yang or Stronger Sibling.

See Also: The Family That Slays Together if parents and other relatives join the siblings on serious crime sprees.

open/close all folders
Anime & Manga
Comic Books
Fan Works
Advertisement:
Films — Animation
Films — Live-Action
Live-Action TV
Literature
Podcasts
Video Games
Web Original
Western Animation
Real Life
In traditional societies with autocratic governments — that is to say, most societies since the existence of agriculture — the consequences for law-breaking have been serious, and no-one outside the extended family can really be trusted. Add another common feature of traditional societies — punishments that are inflicted on entire families regardless of individual guilt or innocence — and the incentive structure for family participation in crime if crime is what's needed is sturdy and strong.