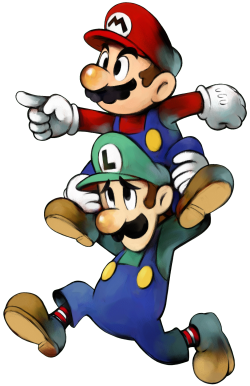 Siblings of either gender working together as equal partners. Their business often involves ass-kicking, in which case they are likely to be Bash Brothers or Smash Sisters as well. The easiest way to tell that a sibling duo fits this trope is when they are most commonly referred as "the Surname brothers" or "the Surname sisters".

Brother–Sister Team is a gender-specific subtrope. Related tropes are Badass Family (for when the whole clan is in on the ass-kicking), Super Family Team (when the whole clan has superpowers), Unrelated Brothers (a Sibling Team in professional wrestling - who aren't actually related), and Wonder Twin Powers (for twins with superpowers that only work in concert). Contrast Cain and Abel. Compare Parent-Child Team.